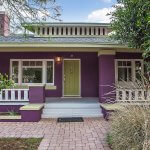 The 2016 Annual Roosevelt Historic Neighborhood Home Tour is Sunday, November 13th. Houses will be open from 11:00AM until 4:00PM. The 1920’s Kenilworth Elementary School will also be open to tour-goers. The Roosevelt Historic District is the common name for a series of neighborhoods that grew to the northeast of the city in the early 1900’s after flooding of the Salt River. Home to many of Phoenix’s most prominent & influential early citizens, the neighborhoods are graced with bungalows, neoclassical, period Revival and Southwest Vernacular Homes. This year’s tour hugs the northern reaches of Roosevelt, in the Kenilworth and Chelsea Additions.

These two areas were platted and developed after 1910 and were some of the first Phoenix “subdivisions” where streets were pre-paved and homes were built-to-order from pattern books or built on spec. A signature style of these neighborhoods- Craftsman and Classic bungalows- are the stars of the show this year. Built for the affluent and influential, these were generally higher-style versions than found elsewhere in the city. Yet they retain the hallmarks of the style’s intent which is simplicity, authenticity and craftsmanship.

Tour-goers will enjoy walking the wide sidewalks alongside towering 100-year old palm trees and lush green lawns. Local food trucks and vendors will be on-site to round out the day.

Tickets are $15 (presale online price is $12 through November 11th.) A limited number of tickets are available for a private guided tour by Hip Historian Marshall Shore. Tickets sold at 5th Ave & Culver St, within two blocks of light rail and bus routes.