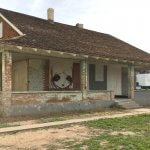 There are few structures with a history that match the Leighton G. Knipe House. We’re not talking “back in the day” of early 1900’s when it was built. It’s the ups and downs of our recent development history, the good ol’ 21st century, that casts the house as the near-tragic character of a soap opera-like novella.

Read about the on-again, off-again development hopes, and the land’s temporary tenant Roosevelt Growhouse. We hope this opportunity will capture the attention of a development team that is qualified, collaborative and fearless about investing in an adaptive reuse project that will bring dividends to the community and their own bottom line.

The following are excerpts from the City of Phoenix Request for Proposals (RFP) solicitation.

The City of Phoenix Community and Economic Development Department has issued an RFP for the “disposition and redevelopment” of the historic Leighton G. Knipe House, located at 1025 N. 2nd Street, and two adjacent parcels at 1009 and 1016 N. 2nd Street. The properties are located in the Evans Churchill Neighborhood and the Roosevelt Row arts district of downtown Phoenix. In 2015, a working committee of property owners, community leaders, developers and staff from the City and Downtown Community Development Corporation launched an extensive process to elicit community feedback for future development of the site and provide the community’s vision for a successful and appropriate development within the neighborhood. Many of the working committee’s recommendations are reflected in this RFP.

The proposed development must include the preservation, rehabilitation, and adaptive reuse of the Knipe House in its current location.

The Knipe House was built circa 1909 by Leighton G. Knipe, a local structural engineer, architect, and planner, who occupied the home from about 1911 to 1924. Knipe’s work included the Marcellin “Frenchy” Vieux House, the Tudor Revival House, the Jefferson Hotel (one of the first “high-rise” buildings in Phoenix), and several buildings on the ASU campus in Tempe. At approximately 3,015 SF, the Knipe House is a good representation of the upscale houses once common in this area of Phoenix. The Knipe House was placed on the Phoenix Historic Property Register in September 2004 and suffered fire damage in 2010. Insurance proceeds were used to reconstruct the roof and stabilize the structure. The Knipe House’s interior is unfinished. The Knipe House is a large, early example of the Craftsman Style in Phoenix, including exposed rafter ends; a large, shed-roofed dormer sheathed with wood shingles; and exposed joists at the cantilevered second floor. The house has unusual massing, with the lower-level constructed of brick in an L-shaped plan and the second level constructed of wood frame in a rectangular plan that is cantilevered on the south side. The Knipe House features exterior brick walls and a full-width recessed porch that wraps around its west, north, and east sides.