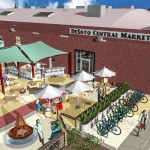 Following Ken Cook’s purchase last year of the DeSoto Building in downtown Phoenix’s Roosevelt Row, the community’s curiosity soared. What what would be done with the historic 1928 building on the prominent corner of Roosevelt Street and Central Avenue?

The question has now been answered. The classic structure that originally housed a car dealership will now be known as the DeSoto Central Market. Part indoor market, part café and eatery, the market will draw on the model embodied by famous markets from around the world, such as the Ferry Building Marketplace in San Francisco, Eataly in New York and Chicago, or, in some respects, the Union in Phoenix’s Biltmore Fashion Park.

“We want to keep that traditional market feel that you can find in New York, San Francisco, and Los Angeles,” said new tenant Shawn Connelly, who will also manage the market. “Everybody I’ve spoken to about the concept has been excited. I truly feel that something like this will be a catalyst for other growth around this area,” he said. Rendering of the exterior of DeSoto Central Market.

While maintaining the history and integrity of the building, the interior space will be modeled to feature multiple vendor spaces, a bar and lounge area, and a mezzanine for offices and multi-purpose space.

The market will encompass many functions, but most notably will serve as an incubation hub for “food-preneurs” as Connelly puts it. A portion of the vendor sections will be built as ‘mini-kitchens,’ with everything required to run a restaurant, allowing burgeoning restaurateurs to become completely operational, while avoiding the startup fees of a traditional stand-alone restaurant.

“What we’re trying to model it after is almost like a food truck kitchen,” Connelly said.

The market portion will feature staples such as fresh fruits and vegetables, and will hopefully have a few artisanal purveyors, Connelly said, such as a baker, or dedicated cheese vendor or meat butcher. Rendering of the open market.

The micro-restaurants will serve walk-up customers inside the market, and through outdoor take-out windows along the north wall. The parking lot will be transformed into an eating and lounging area for the cooler months. The nearby light rail stop and urban neighborhoods will hopefully make it an ideal destination in downtown, Connelly said.

“The best use of the space is to make it a great outdoor area,” Connelly added.

“What we envision using it as is a multi-purpose space. Maybe during First Fridays we can bring in other temporary tenants, or during the fall have a pumpkin patch festival…different types of things to where we really try to highlight what’s going on during that particular season.”

If all goes well within the market, the hope is that the owners of these smaller restaurants will one day be able to take the next step by moving out of the space and opening a restaurant of their own.

“What we’re trying to do is really embrace the entrepreneur, people who are passionate about the food industry. We want them to do well and then graduate…and hopefully open up another location. The hope is to expand beyond our walls and make a name for themselves,” Connelly said. Rendering of the bar at DeSoto Central Market.

This is the first entrepreneurial outing for Connelly, who began cooking at 17 and continued throughout college, where he majored in logistics management and marketing. After a variety of roles within the the food industry, from kitchen to corporate management, he decided to take a chance on his love for markets.

“I’ve always had a passion for development, food, and markets in general.”

Maintaining a historic building while infusing new activity into the area seems to be the recipe for success in downtown Phoenix. Connelly plans to finalize the interior design soon, and is hoping to open the market by the end of 2014.

Editor’s Note: This story has been edited for clarity since publication.