New History in the Making 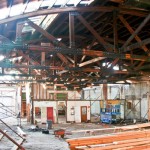 Exterior rendering of the DeSoto Building

In downtown Phoenix, our affinity for refashioning the old into new is evident on every street. An old house becomes a new bar, and the classic charm creates something that a new building could never quite capture. It’s part of the city’s unique flavor.

And so, in the sweeping renaissance of our downtown area, add the DeSoto building on Roosevelt and Central to your list of new favorite places. Business owners hoping to create something new in a classic space are quivering with anticipation.

Formally C.P. Stephens DeSoto Motorcars, the DeSoto building is experiencing a long-awaited rebirth at the hands of a new owner and a historically minded architect.

Built in 1928, it was the original home of the DeSoto car dealership, but has housed an array of car companies, motorcycle shops, stores and agencies since, finally turning into a warehouse of sorts. A recent foreclosure sale put it on the market, and ultimately into the hands of the bank. From there, it became a tough sell to prospective buyers due to the age, and less-than-pristine structural status of the classic building. The historic DeSoto Building during restoration

But after Washington-based developer Ken Cook expressed interest, he asked Bob Graham of Phoenix-based Motley Design Group to take a look. It was Graham’s opinion that the building could be restored.

“Most people went in there … and they ran away screaming,” Graham said. “Most prospective buyers were trying to buy it purely for the land value, but Ken came in with the idea to keep the original building intact, and renovate the space to house new tenants.”

Cook made an offer to the bank, and began the process of restoring the original building with Graham’s help. The restoration became a very involved project, due both to the repairs that were needed and the commitment to maintaining the historical integrity of the space.

“Ken, as the owner, obviously is the driving force. But we designed the project for him, using all sorts of incentives to try to make the project work,” Graham said.

“We were able to get a City of Phoenix building grant from the Historic Preservation Department, and we are also using historic preservation tax credits from the federal government. Basically, any way we can figure out to sweeten the pot and make the project work. As we got into it, we found the details of what the history of the building was, and we’re really trying to leverage that history as being a really big selling point.”

In a twist of fate for a building that was created to sell cars, Graham said he hopes that tenants will exploit the location’s nearness to the Roosevelt light rail stop, and draw traffic from the busy transportation connection. They will have to, as the space only feature 11 parking spots as current plans stand.

“We need tenants that are going to be able to capitalize on light rail, pedestrians, ASU students, whoever. So if they’re appealing to that crowd, then I think it will be fine. We’re not looking for typical suburban use that people will drive for.” A rendering of the future facade

Graham noted that while the exterior renovation will be done within the next two months, the interior renovation would not begin until tenants are secured. The building will house between one and five tenants comfortably, and they are planning on customizing the interior design depending on the needs and final number of tenants.

While the history of this particular building is garnering more attention than a typical restoration project, for Motley Design Group, restoration is their bread and butter. The company is one of the few architectural firms in Phoenix that focuses on historic preservation projects.

“Historic preservation is kind of my specialty. Not many architectural firms around town do it, because, well, we don’t have that much old stuff compared to other cities,” Graham said.

“I think most people like old buildings. The reason that we have so many new buildings in Phoenix is because we’ve torn down most of the old ones. From a developer’s standpoint, it’s a lot riskier to do a historic project than just to build a new one.

“But in this case, I can’t imagine that the end product would be seen by the public as being a nicer thing if it were a brand new building.”

For more information on the DeSoto Building project and tenant leasing options, visit the site.