Rev It Up at Trunk Space’s 4th Annual Indie 500 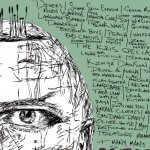 At 8 a.m. on Saturday, May 6, The Trunk Space will drop a figurative checkered flag on their Fourth Annual Indie 500 music marathon. Over the next two days, they’ll speed toward their goal of 500 songs in a row, played live by one local band right after the next. It’s estimated they’ll cross the finish line early evening on Sunday, May 7. Flyer designed by Seth Kasselman. Courtesy of The Trunk Space.

According to Trunk Space co-founder Steph Carrico, the initial idea for the event came from thinking about the Indy 500 and Indie also being a type of music. They launched it as sort of a joke, figuring it would be a one and done thing. But every one had so much fun, they decide to keep it going. Now four years later, it’s officially a tradition and Carrico hopes it will continue to grow.

This year’s Indie 500 will feature nearly 100 bands, so you can expect to hear a wide variety of sounds. You’ll find the full line up here. To help reach the 500 mark faster, the bands will play in multiple rooms, ensuring a quick transition from one to the next. “It will be more of treasure hunt than years past,” said Carrico. Admission to The Indie 500 is $10 for a wrist band, which allows attendees to leave and come back later. The event is all-ages.

Along with the music marathon, The Trunk Space will also be celebrating their 13th anniversary. The all-ages performance venue originally opened in 2004 on Grand Avenue and in 2016 relocated to the Grace Lutheran Church campus on 3rd St. and Moreland. “It’s pretty crazy that Trunk Space has been around for 13 years, “ says Carrico. “I figured if we made it for 6 months I would consider it a success.”

Carrico is happy with their new home and the direction in which The Trunk Space is headed. “Grace Church is treating us so well. I am also really excited that we will be a non-profit soon. I feel like these are all good things in making Trunk Space sustainable.”

Tickets: $10 for a wristband that allows re-entry, available at the door. All ages show.