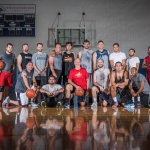 Now that your fantasy football lineup is officially on cruise control, and you have adequately rehearsed your victory speech for the end of the season, it is time to start thinking about the next item on the list: Basketball.

Not only is Phoenix home to one of the most prolific sports teams in the NBA, but look close enough and you will find a slew of indoor and outdoor basketball courts hosting daily pick-up games. Indeed, there is no better way to take advantage of the cool weather, and pay homage to the Suns’ 49th season in the league, than by shooting some hoop in the heart of downtown!

We found three hidden gems to check out depending upon your availability and your capacity to still knock-down that outside jumper – though players of all abilities are welcome.

1.) Rise and Shine with the Lincoln Family Downtown YMCA Jump start your day by running the floor early at the downtown Phoenix YMCA! After partnering with Arizona State University on a $25 million, 75,000 square feet addition in 2013, the new and improved “Y” regularly features a dozen or more players eyeing a game. “It’s an eclectic blend of professions and skill-levels,” said Brent Gifford, a morning regular and engineer at Arizona Public Service.  “I’m 57, and I have kids older than most of these guys,” he smiled.  “But they still can’t keep up with me.”

New players are always welcome, so set your alarm early.

2.) Power Lunch with Lifestart at the Renaissance Athletic Club If 5:45 a.m. is too early, head over to the Renaissance Athletic Club. This 3/4 court has been known to feature the proverbial “who’s-who” of the legal profession – although you can leave your professional attire at home for this one. As you might expect, the competition is fierce, the games are quick, and the space is limited – so come ready.

Cost: Memberships start at ~$40/mo. for non-tenants; Guest passes are $12 at the door For the late risers, light-lunchers, and cold-blooded street ballers out there, downtown Phoenix has several new and challenging opportunities to showcase your talents in the evenings. The Encanto Park Sports Complex at 2227 N. 15th Ave. is renowned for its pick-up basketball.  And Grant Park at 701 S. 3rd Ave. is a fun spot with outdoor lighting and great views of the city.

One of our favorites, however, is Central Park.  Located in the heart of downtown, Central Park features our hometown Phoenix Suns logo right in the center of the court. The chain nets give it that authentic feel, altogether making this court a truly unique Phoenix landmark.