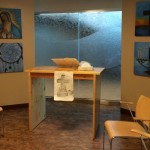 If her first calling was to join the Sisters of St. Joseph of Carondelet community, Sister Adele O’Sullivan’s second was a literal phone call, expressing the need for a doctor to serve the homeless.

“My community trained me to be a doctor. I was a sister first, and then I went to medical school with the goal in mind of taking care of the poor. I had been working in various settings with the poor when I got a phone call that they needed a doctor for the homeless, 20 years ago. And obviously the need to open medical respite was a need that had been so well acknowledged in the community for a long time … it was waiting for me.” The Sisters of St. Joseph is a community that actively tries to identify the needs of the people, and figures out how to meet them, Sister Adele said. Respite homes for the homeless is a pronounced need in every major city in America, but requires a delicate balance of ingenuity, patron support, and community buy-in to thrive.

“Medical respite is a national phenomenon that is widely acknowledged as a best practice – every community that gets medical respite up and running does it in a creative way,” she said.

In Phoenix, that creative solution is Circle the City. Founded in 2008 by Sister Adele, Circle the City fills the medical needs of the most acutely ill men and women experiencing homelessness in Maricopa County. In the beginning, Sister Adele raised money on her own, bringing the stories of those in need to the community at large, and storing the donations in a shoebox.

In 2011, she partnered with Hospice of the Valley to acquire the building at 333 West Indian School Road, and quickly began construction on the 50-bed, 17,000 square foot nonprofit medical respite center. In October of 2012, she admitted her first patient, and the impact the organization would have upon the homeless community would continue to grow.

In May of 2015, the center expanded by launching the Assertive Community Treatment team, which focuses on providing mental health care to seriously mentally ill people experiencing homelessness. In September of that year, the organization launched The Parsons Family Health Center, at 3522 N. Third Avenue in Phoenix, which provides primary healthcare for individuals and families experiencing homelessness. They also operate a mobile medical unit that brings healthcare into the community, and reaches the homeless population beyond the reach of their physical locations.

As we tour the facility, Sister Adele is merely five minutes into her description of the entry hall when she’s stopped by a patient. Kenneth, it turns out, was the very first patient at Circle the City, and is back to be cared for during treatment for leukemia.

“If it wasn’t for this lady I wouldn’t be here today. She gave me hope,” he said.

The two-story facility offers those staying a comforting space to take refuge while receiving medical care, from recuperative to hospice. The bottom floor features a chapel, with illustrations featuring religions from around the world. “The message is that spirituality is a very important part of who we are and the healing process, and whatever your spirituality is, we’re going do everything we can to nurture it while you’re here,” Sister Adele said.

A kitchen and two dining rooms are just down the hall, where the walls are decorated with illustrations and written works from former patients. At a wall filled with photographs, Sister Adele pauses to discuss a former patient who recovered from her surgery, got a job, and was able to move out on her own. In the middle of this, she is once again stopped by another patient.

“Thank you, from the bottom of my heart,” he said, as he gave Sister Adele a long hug.

Upstairs are living quarters and exam rooms, where a 24/7 nursing staff provides care to patients from every walk of life; some longtime Phoenicians who’ve struggled with homelessness, some simply caught off guard by unfortunate circumstances.

Patient Michael Nigh found himself in such a situation when he came to Phoenix for a job, and his new company went unexpectedly bankrupt. An emergency operation came up, and he had to go to a Maricopa country facility for his recovery before learning about Circle the City. The difference in care he said is night and day.

“I was here for four to five months, and they never once asked me ‘when are you going to leave?’ it was, ‘what can we do for you?’”

In fact, after Nigh’s first stay, he had an additional operation and again went to a different facility to recuperate. Through the grapevine of caregivers, the people at Circle the City caught word of where he was, and immediately brought him back.

While preparing for yet another surgery, Nigh is able to work with the case managers at Circle the City to obtain disability benefits. From help with hospital forms to driving him to appointments, he raved that “there’s nothing they won’t do for you.” That kind of care is rare in this form, because care for the homeless generally requires a big commitment from the community. At Circle the City, that support materializes not just in a dedicated staff, but a network of volunteers who bring their trades to their patients.

Volunteers who normally fill the Phoenix Symphony with music bring their instruments to the living room of Circle the City, offering sublime musical relief to patients. Physical therapists, creative writing instructors, barbers, and job placement experts are among the many volunteers who lift Circle the City beyond a respite and rehabilitation center; they give it a sense of home. As Sister Adele points out, recovery can be a long, somewhat boring process, with endless hours of nothingness on one’s hands. To have volunteers come in and perform, lead a class, or even take patients on outings and to sporting events, helps keeps spirits high during recovery.

“We’re working with a population that not only doesn’t have homes … they also are alienated from a civic community which sometimes doesn’t either know they’re there or acknowledge their presence,” Sister Adele said.

“Certainly it’s health care, and getting into housing, but it’s also the reintegration back into the community that happens with the volunteers. When they’re at Circle the City and the community comes in to embrace them with that kind of energy, that’s what conquers homelessness, that’s what gets people back on their feet again.”

During the tour, visiting doctors from Tucson and former colleagues of Sister Adele, look to discover the key to Circle the City’s success, with the hopes of duplicating it down south. It becomes obvious that the best indicator of success is community buy-in and support, and empathetic volunteers whose contributions amount to life-changing assistance for patients.

For those in the throes of homelessness, simply having a place to sit down and rest can mean so much. To offer peace from the frantic motion of life, and dedicated care to rehabilitate from surgery and ongoing treatment, this is the immeasurable good Circle the City has brought to so many lives in Phoenix.