A Clear Look at Homelessness 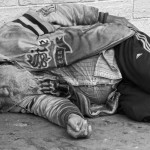 “I think human beings are just naturally compassionate,” says artist Jon Linton. “We all have that desire to help when someone’s in trouble, and that’s what really drove me to create this project.”

Linton’s images are the centerpiece of I Have A Name, an exhibition opening this First Friday and continuing with interwoven events through December at {9} The Gallery. Along with 16 other artists, Linton and gallery owner Laura Dragon hope to spur awareness of homelessness and evoke compassion.

Linton grew up in Chicago and published an arts magazine in the Valley before turning to other projects. The stark clarity of his black-and-white portraits comes from an idea that incubated for around 15 years. “That’s the funny thing,” he says. “I’m not a photographer.” He discussed the project with an artist friend who asked, “You’ve been talking about this a long time; when are you going to do something about it?”

“‘I need a plan,’” Linton recalls replying. “No,” his friend declared, “you just need a f*cking camera.”

It was as simple as that. “When I saw someone who looked like they might be in need, I’d get out of the car and start a dialogue. I’d introduce myself the same way I’d talk to you, or to anyone else,” says Linton.

The inspiration for the project’s title came from Chuck Ridgeway, the first homeless man he photographed. When Linton introduced himself and asked Ridgeway for his name, the man said, weeping, “You have no idea how long it’s been since someone has cared to ask my name.” After that eye-opening conversation, says Linton, he strove to speak “with those people who don’t have a door to walk through at the end of the day.” He adds, “I’m really not interested in passing judgment on how or why folks find themselves in trouble or homeless.”

Instead, Linton’s goal is to communicate with dignity. “I sat down and talked with a young homeless man with a drug addiction,” he recalls. “I told him, ‘It’s Thanksgiving — you need to go home. Believe me, your family misses you.’ And I got a call from his mother, thanking me.”

“If I can do just that,” Linton continues, “just make that one difference…that’s what I’m working for.”

Although the I Have A Name project moves to Scottsdale’s Gebert Gallery in May, it opens at {9} The Gallery thanks to a deeply personal connection.

“In September, Jon…came by to talk to me about another project,” says {9}’s curator-owner Laura Dragon. “He showed me some of his work, and…I shared my…story, which was that I was homeless for a couple of years.”

“It was something that really touches my heart,” she continues. “I fed the homeless for Thanksgiving…I was out in Hance Park handing out food boxes and clothing. It’s a place that’s really important to me — I’ve had some personal experiences in that world.” The I Have A Name project has grown to include additional artists and a video installation, as well as an ongoing book bag and shoe drive. The Haymarket Squares perform a benefit show on December 14, and a Third Friday reception on December 20 launches the exhibition’s accompanying hardcover book. Linton also hopes to take the project to other venues across the country and create murals, “a permanent monument in honor and remembrance of those that have died on the streets of that particular city.”

“I feel like the holidays are such an important time, because it’s the season of giving, right?” Dragon says. “But what does that look like to the people in your community that we kind of walk around, and are invisible?”