The Art of Awareness 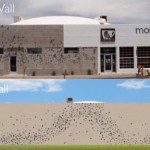 In December 2013 Downtown Phoenix Journal covered an exhibition featuring artist and homelessness activist Jon Linton and his “I Have A Name” project.

Linton’s collection of black-and-white photos of people living on the streets returns downtown in a February exhibition at monOrchid’s Bokeh Gallery, and “I Have A Name” has expanded with ambitious plans for a mural on the monOrchid building. The gallery show opens on February 6, with additional events on February 13 — when the local support organization Pineapple Triangle hosts an artisan market benefiting the mural project — and on February 20 (the closing reception).

Meanwhile, Linton is running an Indiegogo crowdfunding campaign to raise money for the monOrchid’s exterior artwork, with the goal of spurring conversation about homelessness. “The ‘I Have A Name’ Project has teamed with prominent artists Brian Boner and Wayne Rainey to create this powerful and important mural,” Linton states in his fundraising description. “A west wall of the building will carry a message in humanity and compassion while the north facing wall shall list names of those lost to the street. The overall scope of this work intends to create a dialogue beyond the boundaries of this city and help motivate action that might end the human suffering that is homelessness.” Of the $15,695 goal, $10,000 is designated to pay for artist labor over several months. “During this past year,” says Linton, “the Project…has supplied or helped facilitate many donations in clothing or hygiene kits to local shelters, and enjoys working with Justa Center and Central Arizona Shelter Services.” He continues, “We have provided shoes, socks, meals and water to our neighbors in need on the street.”

Linton describes another aspect of his organization’s charitable activities. “Recently, we sold tee shirts printed by TumbleTees, a local Phoenix company that hires formerly homeless teens, and used the proceeds to provide a meal to 50 homeless veterans at Christmas at MANA House.”

Although “I Have A Name” is not a non-profit 501c3 organization, its association with monOrchid’s Shade Projects allows tax-deductible charitable contributions. Linton explains, “The…project is essentially a one-man army, and while receiving donations that have allowed the exhibition to travel, our efforts remain self-funded.”

“Over these past months, I have dedicated nearly 1800 hours in expanding this message of compassion,” he adds. “I continue to take photographs and gather narratives weekly. It’s tragically dehumanizing to be on the street — on many occasions the most valuable thing I can offer is an ear.”