When the President (and the Media Circus) Comes to Town

President Barack Obama addressed the Veterans of Foreign Wars (VFW) convention in Downtown Phoenix on Monday morning, as so many presidents have done before. It’s generally a low-key media event, but one that draws thousands of combat survivors, their spouses (and businesses interested in gaining new customers) like clockwork to whichever city is holding the convention that year. And just as predictably, wherever the president goes, the circus follows.

As the morning drew on and Obama’s keynote address grew closer, hundreds of protesters lined Washington Street: pro-reformers mostly on the north side, and anti-reformers (the larger of the two groups) on the south. Police kept watch from the middle of the street.

While having just finished three town halls dedicated to dispelling rumors about the proposed healthcare reform, it was to be expected that healthcare was on many minds that morning. Yet the irony arose from the difference between Obama’s speech and the protester’s placards. The president addressed the wars in Iraq and Afghanistan and veteran’s issues, and only brushed on healthcare as it related to the VFW members. Protestors were concerned primarily with the highlights of proposed healthcare reform, such as adding a public option and finding ways to pay for it, and only mentioned the war when chants such as “healthcare, not planned warfare” took hold.

Down the street from the convention center, a large group assembled at Tom’s Tavern to be a part of a healthcare discussion led by J.D. Hayworth, former 5th district representative and current right-wing talk radio host.

“At least 500 people came here to talk about healthcare,” said Tom’s owner Mike Ratner. “The mood was respectful. This group was primarily against the changes being proposed.

“I’m very pleased that people are becoming involved,” Ratner added. “The only thing I don’t like is when you’re outrageous in how you express yourself. We need reasonable formats for conversation.”

Those protesting outside the VFW event did stay mostly respectful, even if some signs were more forceful. Some called Obama a socialist, declared the middle class needed saving and others read that healthcare was in desperate need for reform. At least one protestor wore a mask that combined Obama’s face with the makeup of the Joker.

Of the chanting, sign-carrying and gun-toting crowd, I was able to only find one protestor who was actually concerned with what Obama was in Downtown Phoenix to talk about.

“War is the bigger issue here,” former ASU student Hari Khalsa said. “I served in the (U.S.) Army for six years. We’ve got a major homeless population of returning vets.”

Obama addressed that issue directly. After noting that he has instructed VA secretary Eric Shinseki to focus on reducing homelessness among veterans as a top priority, he added, to much applause, “Because, after serving their country, no veteran should be sleeping on the streets. We should have a zero-tolerance policy for that.”

While the president read his prepared speech, the media kept busy. Never having covered a presidential event before, it was fascinating from a newbie’s eyes. For the 35 minutes or so the president talked, cameramen and women scurried around the platform to get a shot of the president speaking or shaking hands with vets; some took pictures of the crowd taking pictures of Obama.

The journalist in front of me used the time before the president spoke to write his story based on the prepared remarks the White House had sent out beforehand. I have to admit, it was odd yet telling to watch the writer type, “Obama told the combat veterans such-and-such,” hours before the president even took the stage.

A cartoonist sat to my right, scribbling out brilliant social commentary in black felt tip. Photojournalists lugged their laptops around, color correcting their stills before filing them off. The secret service looked on. Sometimes a vet would get too close to the cordoned-off sections in his chance to get a better shot of the president; a VFW volunteer would shoo the offending white-haired picture takers away.

Afterward, I wandered around the convention center, getting people’s reactions about Obama’s speech. One refused to talk to me, one wanted to take me to lunch and another wanted to pepper me with healthcare facts a friend had told him from FOX News. Some were more interested in purchasing bald eagle ornaments, MIA pins or “National Terrorist Hunter” stickers.

But as a whole, the Arizona vets were willing to chat about what they were hopeful for and what they wanted to see change. Invariably, every single one mentioned something about healthcare: reducing vets’ wait times for getting health insurance paperwork through, support for women’s preventative medical tests like mammograms during service and after being discharged and ensuring full medical coverage for service members’ families.

While Obama only touched briefly on healthcare, one issue he did include was psychological care, such as treating post-traumatic stress disorder and traumatic brain injuries.

“I terribly hope they can take care of the stress the Iraq War veterans are coming home with,” Allen Higgins, Commander of VFW Post 12006 in Mesa, said. “Obviously, some of them haven’t been able to deal with it,” he said, referring to the increased rate of suicide within returning vets.

So, while it seemed like a lot of hubbub for the reading of a prepared speech, it nonetheless was democracy in action. And, it brought a stir to the Downtown area, giving residents a chance to voice their concerns about healthcare, even if only to Phoenicians walking to work and to the police keeping the sides apart. 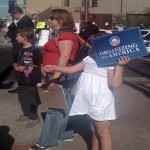 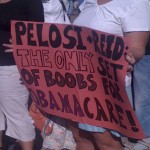