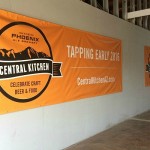 There’s only one thing better than craft food and craft beer, and that’s craft food made with craft beer. And it’s this combination that has inspired much of the menu at Phoenix Ale Brewery’s future gastropub—Central Kitchen. Scheduled to open March 2016, the pub will join tenants such as Okra Cookhouse & Cocktails and The Root Salon at the completely renovated Crown on 7th infill project on 7th Street south of Bethany Home Road. Just four and a half years after opening their popular Phoenix microbrewery at 30th St and Washington, Phoenix Ale Brewery is ready to embark on their next adventure—and it’s a cause for a specific and very delicious celebration.

The concept behind Phoenix Ale Brewery Central Kitchen is simple: Celebrate craft beer and craft food. And they aim to do this while creating community in a relaxing neighborhood pub atmosphere. But Central Kitchen isn’t going to be your average gastropub with perfunctory fare like beer battered fish & chips, and stout brownies.

Central Kitchen plans to take their menu to a whole new level.

Rather than food and beer existing as purely separate items, Central Kitchen’s menu will  incorporate their locally crafted brews into roughly one third of the recipes—an approach that Rich Stark, Phoenix Ale Brewery operating partner says “reinforces the complementary nature of the beer and the food.” “It’s really important to tie those two elements together,” Stark said. “Not just offer them under one roof.”

Stark came up with the idea for Central Kitchen last fall. As the former CEO of NYPD Pizza, Stark said he’s had a strong relationship with Phoenix Ale Brewery Owner George Hancock since 2012, when he approached Hancock about creating a custom beer to complement NYPD’s top-selling pizzas. According to Stark, the success of that venture really “underscored the popularity and potential success of quality food and complementary beers.”

And with Stark’s background, it’s no surprise that pizza will also be one of the many items on Central Kitchen’s menu. Stark has brought his very own family recipe all the way from Baltimore to add to the Central Kitchen menu. The Brew Master Cast Iron Pizza was a recipe that his late uncle and aunt sold in their pizzeria nearly 30 years ago.

“I was so impressed with (the pizza) as a young man that I always had in the back of my mind that this was a product that would do extremely well in other markets,” Stark said. Thankfully Phoenix is the first of the other markets.

If you think the idea of deliciously crafted complementary food and beer sounds fantastic, you’re right. And here’s the spoiler: Phoenix Ale Brewery management is pretty stoked about it, too!

“(Central Kitchen) is going to be a place with lot of experimentation between food and beer pairings,” said George Hancock, Phoenix Ale Brewery general manager and principal owner.

“You don’t see a lot of that happening in the Valley,” he said. “It’s new and exciting.”

Construction on the project starts this month. As for the space, Stark says guests can look forward a relaxing and modern yet comfortable feel that combines copper textures that mirror the brewery.

“It’s going to be a place where people can have a beer at the bar, sit and enjoy a meal with their family at a community table or booth, or watch a game,” Stark said. With plans to eventually open multiple locations across the Valley, Stark said that Central Kitchen’s smaller, more intimate setting makes it unique from many of the Valley’s other restaurant-brewery concepts. Central Kitchen is “shrinking down.”

“The opportunity to engage the guests is what I seek,” said Stark. By valuing the personal relationships, Stark said Central Kitchen will become a go-to place.

And as a quality beer and food enthusiast himself, Stark’s idea to celebrate craft beer and craft food had been—wait for it—brewing for a long time.

“It’s been a dream of mine to own a gastropub where the food is exceptional and really complementary to the beer selection,” Stark said.

Fans of the original taproom at Phoenix Ale Brewery needn’t worry; Hancock says business will continue as normal, but he’s got some other tricks up his sleeve.

“We’re working on new brews for the new space,” Hancock said. “We may even have a new brew naming competition.”