Wire | Okra, From the Owners of Crudo, to Open this Summer in Central Phoenix 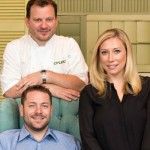 Okra, New Restaurant from the Owners of Crudo Coming to Central Phoenix this Summer

The trio behind the award-winning Crudo & Bar Crudo (3603 E. Indian School Rd. www.crudoaz.com) is excited to announce the plans for their sophomore effort, Okra, an all-new offering that blurs the lines between Southern and Italian cooking. Led by chef Cullen Campbell, wife/co-owner Maureen Campbell and co-owner/mixologist, Micah Olson, this project represents a return of sorts for Chef Campbell, who was inspired to reconnect with his family’s deep Southern roots that occupied his formative culinary years. After splitting time between Phoenix and his family’s cotton plantation in Forrest City, Arkansas, Campbell attended college just across the Mississippi River in Memphis, where he was steeped in the city’s classic culinary traditions, including the secret to true Tennessee Hot Chicken (hint: if the key to French cooking is butter, down South it’s lard). Okra will serve as a showcase of these experiences, and much like Crudo, will combine modern takes on traditional dishes with a hint of classic Italian influences. The bill of lunch & dinner fare will be served daily and will include some immediate standouts, like Southern Fried Chicken served two ways: Buttermilk-brined or Tennessee Hot, plus rib-sticking eats such as Pig Pot Pie, Ham Hocks and the Redneck Burger, accompanied by classic accouterments such as Mississippi Comeback Sauce and Alabama White BBQ Sauce. You’ll find the subtle, and signature, Italian influences throughout, with focaccia bread pizzas and the aforementioned Southern Fried Chicken topped with a rustic Umbrian meat sauce. Wash it all down with an expansive collection of wines, craft beers & cocktails, including a seasonal selection of Mint Juleps hand-crafted by Olson to feature the finest small-batch bourbons.

Now under construction inside Crown on 7th, a striking rehab of a midcentury modern strip in north-central Phoenix, Okra’s (5813 N. 7th  St.) 100-seat space will blend indoor and outdoor environments while sporting an open kitchen, a first for this culinary team. The result will be a rich, intimate experience that connects the front and back of the house like never before.

While Okra isn’t slated to open until Summer 2015, you can savor a sneak peak of the authentic Southern-fried fare, served with a hint of Italian flare at a special Kentucky Derby Dinner. Hosted at Crudo on Friday, May 1 & Saturday, May 2, 2015, guests will be treated to a Tennessee bourbon tasting and three-course cocktail paired dinner featuring preview dishes from Okra for $65 ++. Reservations required (602-358-8666). For those that can’t make it, anyone can catch an inside look at these dishes, cocktails and restaurant developments on Instagram under the hashtag #talksoutherntome.