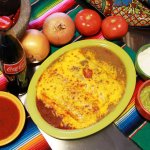 “We couldn’t be more pleased to be working with the Hansen family who has such a long vast history here in the Valley. The addition of Rito’s Mexican restaurant is a perfect addition to the dynamic tenant mix at The Crown on 7th property,” said Niels Kreipke, co-owner of Desert Viking Development and managing partner of the project.

Rito’s Mexican Food was founded in 1977 by Rosemary passed the reins to her daughter, Charlotte Hansen, who has worked at Rito’s since its inception, over 40 years ago. The company’s growth continues, with the support of Charlotte’s family, and is excited to announce the opening of their third location, during Summer 2018 at the historic Crown on 7th street, an adaptive reuse property owned and managed by Arizona based Desert Viking Development and DWG Phoenix, LLC.

With great support and enthusiasm, Daniel Hansen, a third-generation restaurateur and general manager, has taken Rito’s into the digital age. For example, you can now order straight from your smart phone! Text ‘Ritos’ to 33733 to receive a link to download their mobile app.

But, at the heart of it all, Rito’s remains committed to serving tasty authentic Mexican food to their guests every day. The Hansen family believes their menu has something for everyone searching for authentic Mexican food, from their delicious award-winning green chili burritos to their mouth-watering guacamole tacos. Traditional dishes include enchiladas, tostadas, quesadillas, and chimichangas.

Get excited, the Hansen family hinted that a few new items will be introduced to the menu. For example, the green chili quesadilla made its debut on the menu earlier this year and is quickly becoming a fan favorite.

Over the last four decades, Rito’s has won New Time’s Best of Phoenix awards for Best Burritos, Best Green Chili, and Best Hole in the Wall Restaurant. And, most recently, USA Today included Rito’s as a participant in the 2018 Readers’ Choice contest for “Best Chimichanga in Arizona.” This is particularly notable as their popularity continues primarily through word of mouth advertising.

The new Crown on 7th location will seat approximately 95 patrons indoors and on the rear patio. It will feature a full bar serving up icy cold Margaritas, wine and cerveza on tap. A walk up “to-go” window will allow patrons to easily obtain their carry-out order or enjoy a cold beverage while waiting for their food.

When asked why the Hansen’s chose the Crown on 7th Street location, Daniel explained, “We grew up in that area. We went to school at St. Francis. We wanted to bring our great tasting authentic Mexican food to central Phoenix. The uptown Phoenix location will provide a unique urban ambiance with our food.“ Hansen continued, “Whether you’re a new customer looking for that unique ‘hole in the wall’ lunch spot or becoming a Rito’s regular, we hope you will leave with the highest level of satisfaction, from the food to the service.”

One of Rito’s regulars had this to say in a recent review, “Rito’s has the crispiest tacos with the juiciest meat perfectly spiced and blended enchilada sauce, and, without contest, the best refried beans anywhere!” Another fan was quoted as saying… “Rito’s Mexican Food is the jewel in the Phoenix culinary crown.”

Visit www.ritosmexicanfood.com for a full menu, gallery of photos, and hours of operation. Rito’s newest location can be found at Crown on 7th, located at 5813 N 7th Street in Phoenix, AZ 85014.