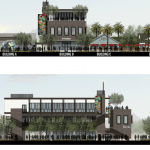 Today Desert Viking Development announced a new project located between 5th and 6th Streets in Roosevelt Row, called The Blocks of Roosevelt Row. The project includes the adaptive reuse of three existing bungalows and the Flowers building, along with the addition of a three-story commercial building. The properties will feature restaurants, an entertainment venue, communal patios and market-style retail. It is expected to be completed in fall 2017, with parts of the project opening next the spring. The Flowers building will be renovated and will include dining and retail, while the early-1900’s bungalows will be renovated to preserve character, as well as to accommodate new restaurant concepts. The market-style retail space will be geared for local artists and artisan retailers, in recognition of the people who created the vibrancy for which Roosevelt Row is known.

Niels Kreipke, Principal and Founder of Desert Viking, says that while the project enhances the cultural vibrancy of the thriving artistic community, special details have been incorporated to protect the neighborhood’s historical integrity. “With so much vertical construction taking place throughout Downtown, we felt it was important to hold on to some of the quaintness of the area by preserving some of the bungalows and structures that have stood for many years.” The master plan for The Blocks of Roosevelt Row was developed by AV3 Design Studios, a Phoenix-based architectural and design firm, who is also leading the design of the 5th Street and Roosevelt properties. The 6th Street project is being led by Lightvox Studios, a local collaborative architecture and design studio. Leasing for the project will be handled by Venture REI, a full-service real estate brokerage and advisory firm.

They are currently working with several potential tenants for the various spaces, but no agreements have been finalized. Existing and recent tenants of the properties have been invited to participate in the project and they are hopeful many will choose to join.

According to Desert Viking, The Blocks of Roosevelt Row will provide the perfect backdrop for those eager to shop, dine, explore, connect and indulge their creative and cultural cravings while proudly evolving the last two contiguous blocks of the neighborhood’s original 1888 Churchill Addition.