The Beating Hearts and Porches of Coronado 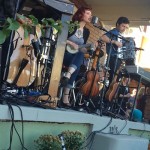 The first house was easy to spot. The front lawn featured a hand-crafted banner framed with PVC. A crowd of bicycles sat parked around it. The street, the driveway, the backyard were all filled with neighbors either just meeting or who’d known each other for years. Some carried pizza. Others, donuts. There was no shortage of beer. The words painted on the banner? “Coronado Porch Concert.”

It was the third event of its kind for the Coronado Historic District. This one, held last Saturday, November 7, featured a different musical act at each of four houses, performing either on the porch or in the backyard. Three neighborhood kids had even gotten up early to draw arrows all over the neighborhood in sidewalk chalk (shout out to Layla, Hayden, and Savannah) to direct the crowd to and from each destination.

It was one of the more ideal situations for a local band — simply set up your gear and wait for the entire audience to literally walk up the street and take its place in front of you.

That’s when the Instagramming began.

If you were watching DPJ’s Twitter and Instagram feeds that afternoon, you saw a steady stream of photos that followed the neighborly mass from one house to the next. At stop one, Gabriel Solorzano, of the up-and-coming Reggae-rock/Latino act Fayuca, delivered a rousing back-patio solo set that immediately had the neighborhood dancing, cheering, and pulling the flask out its collective back pocket while the little ones lingered around Solorzano’s feet to show off some toddler dance moves.

That’s when a bearded minstrel with an operatic voice and an acoustic guitar led us to stop two, where Mr. Mudd and Mr. Gold delivered their energetic, Avett Brothers-style Americana to the already-growing crowd of 200 or so with a banjo, a guitar, and some determined foot-stomping.

Stop three gave us The Ghost Light Revue, whose elegant vocals were backed by a ukulele, mandolin, accordion, standup bass, and a gaggle of other arguably anachronistic instruments. The crowd had reached critical mass by this point. Someone at stop four tried to count and landed on 250 people. And this is what Fairy Bones were met by as they pounded their angsty alt-rock out from the backyard of a house with a concave backyard perfect for makeshift auditorium seating. The neighborhood horse made an appearance. So did a guy in a mustard costume. Someone brought two kegs of wine. One house had four taps. A man called Phil Freedom hauled groups of people between houses on a topless golf cart (one he normally drives around on weekends to do good deeds for people in the neighborhood). Little kids danced and laughed. Dogs met each other and each got petted by a hundred different people. On the way to stop three, the crowd crawled up the sidewalk, two tiny dogs running alongside their owner, one of them a chihuahua with a stuffed owl in its mouth almost as big as he was. It was just that kind of day.

Mike Logan, one of the event’s organizers, explained that this all started when a neighbor described a similar event back in her hometown. A few people pulled together and decided to make it happen here. “Coronado probably has more artists and musicians per capita than maybe anywhere else in Phoenix,” he says. There are recording studios. Bands galore. And this is a neighborhood that already includes a shortbread baker, a tamale slinger, a metalwork artist, and a collection of little free libraries. “There are so many people that want to be part of a community,” Logan says, “and I think, when they move to Coronado, they do so because there’s a chance to build something together, and to share.” Logan refuses to take any credit for the day’s success. He says it involved a slew of community-minded neighbors donating their time, energy, and porches to pull the thing off. “I’m just another volunteer,” he says. One neighbor even created a Spotify playlist to promote the bands in advance.

As a drummer, I have always been acutely aware of how much I was disturbing the kind people up and down my street. Here, the Coronado district collectively invites its resident bands outside to show their stuff. “I cherish and love the fact that I’m living in a neighborhood that is musically dense,” says Logan. “It’s a musical village, if you will.” And he’s right. Besides the recording and touring artists, Coronado is home to recording studios and even a musician’s union.

This is how it is in our downtown neighborhoods.

“I think Phoenix is a really well-kept secret,” says Logan. “There’s so much underneath the surface that when you live here, it sort of opens up to you, and the more you get involved, the more you can feel the energy that’s building in the city, and that’s already here.” Arizona is a state of transplants and eccentricities, and Phoenix is its capital. Everywhere you go here, the artists support each other. They are major community drivers. The house where Mr. Mudd and Mr. Gold played, for example? It’s owned by Drew Switzer, guitarist for the American Longspurs, another Coronado-based band. Says Logan, “Now you have a musician who lives in the neighborhood open his house and provide a stage for another musician.”

On the way to the last stop, I was 100 feet too far away to grab the photo that would have captured it all: a large pickup truck driving slowly down the street, its bed full of adults and kids, a skateboarder holding on to the tailgate and rolling along, everyone laughing, everyone weaving their way to cheer for the next band.