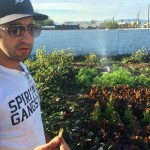 Farm-to-table food is not usually associated with the work of charitable kitchens, but the Urban Farm at St. Vincent de Paul just south of downtown Phoenix helps make locally sourced, sustainable and nutritious meals accessible to those who need them the most.

From Parking to Produce
Once a gravel-covered parking lot, the site of the St. Vincent de Paul Urban Farm was transformed into a lush green garden almost two years ago with the generous help of volunteers, support from community partners, and guidance from local leaders in urban agriculture. From its modest beginnings as a single-bed garden, the Urban Farm has grown to a solid acre of dark, healthy soil brimming with an abundance of fruits and vegetables, which are harvested for use at all five St. Vincent de Paul dining rooms throughout the Valley.

Urban Farm Manager Tony Kasowski has been an integral part of the farm since its inception. He and Jim Dennis, volunteer, worked together on a previous garden at the St. Vincent de Paul Human Services Campus before starting the Urban Farm. Despite the success of the garden at Human Services, some people didn’t know what to expect from the Urban Farm.

“When I started (the Urban Farm) with Jim, people just thought it was cute,” Kasowski said. “They didn’t see the value of it.”

Thankfully, as an experienced urban farm consultant and educator, Kasowski knew the farm’s worth and had a big vision for its future.

Healthy Harvest
Located just off the I-17 freeway at St. Vincent de Paul’s main campus, the Urban Farm is a sight for sore eyes in an otherwise bare landscape. Upon entering the farm, your eyes are immediately drawn to a vibrant, colorful flower-like mural on a shed to the north. If the design seems strangely familiar, don’t be surprised — it is the logo of local cold-pressed juice company, Kaleidoscope Juice.

One of the Urban Farm’s community sponsors, Kaleidoscope Juice provides Kasowski with a seemingly endless supply of leftover juice pulp, which is applied to the soil to help create the rich, fertile soil necessary for growing a variety of produce. The bounty produced by the Urban Farm is nourishing and chemical-free. The natural farming and permaculture processes used mean there’s no need for fertilizers or pesticides.

“We’re bringing the highest quality product to people that usually go without,” Kasowski said, adding that this farm-to-table approach brings integrity back to the food for these families in need.

Once harvested, the produce is transported within the same campus grounds to the kitchen where it is then batched and distributed throughout the four other dining rooms in the Valley.

According to Esther Martinez, St. Vincent de Paul public relations manager, the main campus serves more than 300 meals each night. The menu is designed by Chef Chris Hoffman everyday and is based on what is harvested.

“We find ways to use it,” Martinez said. “Nothing goes to waste.”

Besides the farm-to-table food, what makes the family dining room at the main campus even more special, is that the volunteers act as servers, taking orders and delivering meals.

Biodiversity
Walking further into the farm, each step brings you closer to the large clusters of green leafy plants and trees scattered across raised garden beds. A huge tubelike, mesh-covered shed sits in the northwest corner of the property that houses plants and another form of life.

Adding an element of biodiversity to the already unique environment, the Urban Farm also raises fish.

Located inside the mesh-covered shed, the Urban Farm operates an aquaponics system that houses 1,000 tilapia in large white tanks. The system utilizes the tilapia waste to fertilize small starter plants. Kale, spinach, and purple basil are among the gourmet greens grown in the system, and according to Kasowski, many of them make their way to the kitchens of local chefs. Through the recirculation of water from the tilapia tanks to long rectangular water beds, the starter plants are provided with what Kasowski describes as a “nutrient-dense natural fertilizer.” With their delicate roots dangling through holes in the styrofoam boards in which they are planted, the starters are able to absorb nutrients from the water.

During this process, the roots also filter the water which helps to provide the tilapia with a consistently clean aquatic environment.

Sustainable, Community
Almost two years after the initial seeds were planted, the St. Vincent de Paul Urban Farm is now producing tens of thousands of pounds of food each year and it continues to grow.

Since January, the three St. Vincent de Paul gardens in the Valley, including the Urban Farm at main campus, have produced 32,000 pounds of food.

Some of that food is even being served in local food trucks throughout the Valley. According to Kasowski, the Urban Farm has developed relationships with a handful of local food truck owners who want to learn to grow their own food to feature a more sustainable, flavorful and nutritious menu. Saffron Jak, Emerson Fry Bread, and Luncha Libre are just some of food trucks currently involved with the Urban Farm.

Not only does Kasowski see this as a great way to spread the word about what the Urban Farm does, he said it’s also an opportunity to give back. “(The food trucks) have to give back least 10 meals a month to area homeless folks or the working needy,” Kasowski said.

Kasowski said this allows the Urban Farm to continue St. Vincent de Paul’s mission of giving, while at the same time finding creative ways to engage the community.

Season of Giving
According to Kasowski, the farm is now at a point where they’re planting as much as possible. In fact, 12 months out of the year Kasowski and his volunteers are planting something.

While he said that managing an Urban Farm is not a simple task, they’re “not doing anything crazy” to make it happen.

“It’s more about preparation and ethics of the land versus skill,” Kasowski said.

By volunteering at the farm, participants can get to learn how to build and grow a sustainable garden in Arizona. Because of the hard work of people like Kasowski and his many volunteers, the St. Vincent de Paul Urban Farm is an ideal model. “There was a guy who celebrated his 91st birthday (at the Urban Farm),” said Elsenheimer who recalled the man being a long-time volunteer for the organization.

Kasowski is thankful for all the volunteers he has, but there can never be enough.

Money and manpower are often scarcities in the nonprofit sector, and while he does the best he can with what he has, Kasowski is always looking for more.

Don’t bother donating your leftover juice pulp. (He has plenty.)

“I need capital resources and volunteers,” Kasowski said. “While any donation helps, the farm is looking for big partners and corporate sponsors.”

Through his vision for the St. Vincent de Paul Urban Farm, Kasowski wants to show his volunteers and the community what is possible.

“My biggest passion of all is letting people know you can do this too,” Kasowski said.