Writers in the Company of Writers 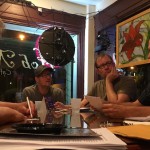 We are alive in the age of writers. Whether memoir, hyper-specific genre fiction, flash fiction, blogs, or something else, the Internet has turned us all into aspiring masters of persuasion and confessional storytelling. And indeed, the greats can come from anywhere.

There’s just one catch: getting good feedback in an effort to hone your craft can be as tough as getting published. Ask your friends and you get friendly replies. For honesty, you need strangers. Enter the Central Phoenix Writers Workshop (CPWW), chock full of people you’ve never seen before who are ready and willing to dish out their reactions to your style, form, structure, dialogue, and any other aspect of your writing to catch their attention.

However, says Jacob Shaver, moderator for the Wednesday night meetings, there is no reason to be intimidated. “Our writing workshops are about acceptance, and about embracing new writers and new artists. At whatever level they’re at, they can get better.” He adds, “If you want to come and sit and listen to the group for a month before you feel the need to read something, that’s totally cool. We embrace that.”

You show up a half-hour early and sign in. If you have something to read, you bring five or six printed copies (preferably 2,500 words or less), and you relay your word count. Promptly at the start time, moderators split the groups into few enough people to keep the total word count for each sub-group to 6,500 or less. For the next two hours (with a short break in the middle), writers read their work to each other as other writers read along and make notes. Afterward, each person volunteers what they liked, what they thought didn’t work, their impressions, and their rationale.

Don’t worry: they do it with grace. Make no mistake: the group’s purpose is singular. Says Shaver, “It’s not an open mic at all. If you’re here to hear to yourself speak and to hear yourself read, you’re in the wrong place. You’re here to get critique.”

The mere opportunity to put your words in front of an audience for thorough feedback is invaluable to any new writer. The same is true for veteran writers. And the group gets them all, whether fiction, nonfiction, blog writers, screenplay writers, or anything else. Shaver again: “Whatever they feel like writing and bringing in, we will critique it.”

The CPWW has been thriving for years. The original group got so large, it had to splinter off into two nights per week, and then again into five nights (the fifth of which was later called off due to venue issues).

Whatever your time constraints, you can probably find a meeting near you. Sundays are at Fair Trade Café at 3pm. Mondays are at Songbird Coffee and Teahouse at 6:45pm. Tuesdays are Carly’s Bistro at 6:30pm. And Wednesdays are at Hob Nobs Coffee House at 6:30pm.

Basically, CPWW takes over a space four days a week at four different locations, almost every week of the year. If you need writing feedback, you can find it in downtown Phoenix.