A Muse on the Move 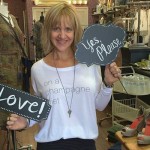 For the past ten years, Victoria Lindley has kept the ladies of central Phoenix decked in the latest clothes, shoes, and accessories from her boutique, Muse Apparel. This month, Lindley will pack up her north central Phoenix shop and head south to reopen in the revamped Uptown Plaza at Central and Camelback. Muse found much success in its current location, but with all the changes that have happened in Phoenix since she first opened her doors, Lindley saw an opportunity, both for herself and for this community.

“When I opened my store ten years ago, I always wanted it to be like a village setting, someplace where there were people mingling, with restaurants and art and shopping,” says Lindley.

Her vision for Muse is a perfect fit for the changes coming to Uptown Plaza. With the new location situated between the existing AJ’s Fine Foods market and the future second location of Fox Restaurants Concepts’ Flower Child, it is likely to draw the desired level of vibrance.

Says Lindley, “I just feel really blessed that we got this spot and that we’re able to do this. It’s going to be amazing for my business, but for me personally, it’s going to be really satisfying for the concept that I always had.” Muse Apparel has a French flea market feel, with a splash of Lindley’s own Bohemian, surfer vibe. She carries contemporary clothing and accessories with an emphasis on wearability. “Though I push the current trends, we offer them in a more classically inspired sense,” says Lindley. “We offer brands that cater to juniors, but predominantly women’s. Our customers are mostly in the 25-55 range, but one of our favorite customers is 84. We try to have something for everyone.”

As a boutique owner in Phoenix, Lindley has learned a lot about our city’s style and is excited to add her experience to the mix of Uptown Phoenix.  “One characteristic that I learned right away as I was getting to know the customers is how well-balanced their lives are. They work hard and play hard and family and friends are a huge priority. This community is tight and I feel very privileged to have become part of it,” she says.

Lindley is wholeheartedly dedicated to the reinvention of the central Phoenix core. Not only is she moving her business, but she and her husband are moving their lives here, as well. After twenty years of living in north Scottsdale, they will relocate to the Portland on the Park condos, currently under construction near Roosevelt Row in downtown Phoenix.

“We’re not only moving my store to some place urban, we’re moving our life to some place urban,” says Lindley. “And we are so dedicated to everything that’s going on. My husband is in commercial real estate and a lot of his business is up and down Central. We’re both really excited to just become involved more in the reinvention of those parts of Phoenix.” Storefronts under renovation at Uptown Plaza.

Though the soul of Muse will remain the same in the new location, the store will have more space, additional dressing rooms and a larger front display window. New offerings will include a line of active apparel and boho-style printed yoga mats. Lindley hopes to also hold more evening events to complement the lively environment of Uptown Plaza.

The new location of Muse Apparel is set to open mid-August, with grand opening celebrations planned for September and October. More information on the store and the moving sales currently under way can be found on the shop’s Instagram at muse_apparel or on Facebook, Twitter or at www.shopmuse.com.