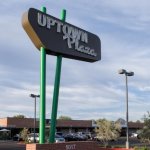 The Valley’s original neighborhood shopping center, Uptown Plaza (est. 1955) is back and better than ever following an impressive three-year restoration project that has once again made this mid-century modern gem the crown jewel of central Phoenix. And now the public is invited to come out and celebrate with an all-day festival on Saturday, January 27 (9 am – 3 pm) featuring live music from local favorite Vinyl Station, free yoga class and cooking demos on the new grass-lined and fountain-filled courtyard, food & drink tastings and one-day-only discounts at Uptown Plaza’s exciting new lineup of shops, restaurants and more. Plus, enter for your chance to win a $1,000 shopping spree, and get there early because the first 500 shoppers will receive a free Uptown Plaza branded tote bag. Related: Midtown Plaza Strips Back to its Midcentury Modern Past

No wonder why Uptown Plaza’s location at Central Avenue and Camelback Road was recently named the Valley’s “hottest intersection” by the prestigious Urban Land Institute of Arizona, while the artful refresh process-which uncovered preserved 50’s-era details such as original hand-painted signage on the red brick storefronts and repurposed former shade supports into stylized bike racks-has been nominated for several local and national preservation and design awards.

At the Grand Reopening on January 27, guests will be able to explore this charming, pedestrian-friendly space, including complimentary group yoga classes hosted on the grassy central courtyard now featuring a soothing custom water feature designed as a nod to the area’s historic flood irrigation system. Led by the local mid-century design experts at Modern Manor, designer Nelsen Partners, builder Kitchell Contractors and landscape architect Kristina Floor of Floor & Associates, the Uptown Plaza team went so far as to recreate period-correct benches found in an old trunk of blueprints from one of Disneyland’s original designers (which also opened in 1995).

“As a Phoenix native who grew up shopping at Uptown Plaza, our goal has always been to restore this neighborhood hub back to Del Webb’s original vision in the 1950s,” says Walter Crutchfield, a principal at Vintage Partners, the Arizona-based commercial real estate development and investment company behind Uptown Plaza’s revival. “Aside from scraping away decades of stucco and other ‘improvements’ to reveal the original brick-lined midcentury look, we consulted with nearby neighborhood organizations and people such as Kimber Lanning of Local First Arizona to ensure we also restored Uptown Plaza’s unique mix of local, regional and national tenants.”