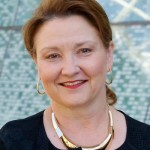 On October 26, 2014, Christine Mackay started as the Director of Community and Economic Development for the City of Phoenix. It’s a big job overseeing several large divisions. She served in the same role for the City of Chandler for six years, but a city the size and complexity of Phoenix is a whole new challenge. We sat down with her to discuss her first ten months on the job and to learn what’s next. DPJ: How do you see your role within the City of Phoenix?

For me, first it’s been about cataloging all of the assets that exist and really understanding those assets. I grew up here, I’ve been here my whole life, but I only came into Phoenix to go to GPEC meetings or a basketball game and then I went back to my suburb. No joke.

Two weeks before I got the call from Paul Blue asking me to coffee, my city council in Chandler was interested in looking at adaptive reuse on some of the old buildings in Chandler. Phoenix had done such a brilliant job with their adaptive reuse that we took a bus tour to see what had been done. I got to see Angels Trumpet,  the Vig, Cibo, the Duce, and Luci’s Market. I got to see all this stuff and I went, ‘I’ve lived here my whole life, how did I not know this was here?’

Now, all I can think about is Phoenix. It’s a dynamic, exciting, cool market, and it just needed help telling its story. So many people are beginning to understand and tell the story: brokers, thought leaders, entrepreneurs, etc. and doing a remarkable job. It’s become much more than just a local story, it’s getting national play and national attention. DPJ: What is your approach and what steps have you taken so far?

CM: My approach is to ‘take no prisoners.’ This is a big, bold, vibrant city and it needs to take big, bold, vibrant steps. This is the sixth largest city in the country and it wasn’t competing as the sixth largest city in the country. So, in the beginning it was about getting a marketing plan done, getting our website done, and getting our strategy set.

This isn’t a ‘fire, ready, aim’ situation, this is very strategic. We got our website done so that it was more attractive to site selectors, corporate real estate executives, thought leaders, and decision makers. We also made it very attractive to that knowledge workforce that wants to find a new place to live.

DPJ: Tell us a little more about that knowledge workforce and what’s attracting these people to Phoenix.

CM: I represent all 517 square miles of Phoenix, but the central city is our unique environment, it is the heart of metropolitan Phoenix. When you look at the way things are going, where a workforce wants to live, where a workforce wants to be, where they want to evolve – it’s in an urban environment. The days of a large house with a pool and a backyard in a suburban market are few and numbered. People want to connect in lifestyle. They’re tired of spending their weekends taking care of their yard and their house. The central city offers an incredibly vibrant lifestyle that the suburbs can’t duplicate.

DPJ: How do you see the connection between Downtown and other parts of the central city, for example, Midtown?

CM: Let’s look at Midtown. When I started, the commercial vacancy rate in Midtown was 38% and now it’s 23%. It’s a nine million square foot market, so that means we’ve brought in 1.3 million square feet of tenants in just 10 months. By the end of the year we will be into the teens.

Midtown has been a kind of ‘red-headed stepchild’ of the central city. Downtown has sports, the central government, CityScape, the Orpheum, etc., but no one had really cataloged the assets in Midtown. It’s just as unique as Downtown, and just as cool as Downtown. Where Downtown is hip, vibrant, cutting edge, thought-leading, sports-minded and fun, Midtown is just a little bit more sophisticated. It’s arts, culture – the Heard Museum, the Phoenix Art Museum, the Opera. The two areas complement each other incredibly well.

DPJ: What are the city’s plans for Midtown this next year?

CM: We have money in the city’s CIP (Capital Improvement Program) budget for 2015-16 for Midtown to really engage and connect with Central Avenue, and with the 3rd Street Promenade. Currently the buildings along Central, which were mainly built in the 60’s, 70’s and 80’s, turn their back on Central, but that’s not the way buildings succeed today.

The city is looking for ways to make those connections, including public sidewalks that go right up to the entrances of the buildings; crosswalks in mid-blocks so people don’t have to go all the way down to the next light to cross to the other side; small landing places with shade; and comfortable seating spaces. For the 3rd Street Promenade, which is anchored by Steele Indian School Park on the north, we’re focused on creating shade and trees and making it both walkable and bikeable. DPJ: What about the northern end of Midtown and into Uptown. How would you describe what is happening there? Where do you see the boundaries?

CM: Any developer would say Midtown goes between the 7s from McDowell to Camelback. So to me, Midtown stops at Camelback and then Uptown starts on the north side of Camelback. When you go into Uptown, you go into a much more suburban market that includes single story houses, and ranch houses with big lots and mature trees.

But look at the area around the Camelback and Central intersection, with all the activity that’s going on there today, like Vintage Properties (Uptown Plaza), the Newton, the BMO building. There’s just so much.

The city owns a little strip of land in that area near the light rail station, on the western side of the empty triangle parcel at the southwest corner of Camelback and Central. We’re going to put out an RFP to dispose of it. Starting in July and August we’re going to hold neighborhood meetings in that area to let everyone know what will be happening on that site.

In addition, the developer who owns the southwest corner is looking at some new development plans for there. The neighborhood had some opposition to what he’d wanted to do before, so he’s really scaled it back to make it more palatable, but the neighborhood will need to have their input, so we’ll see what they say.

DPJ: We’ve heard that there is a comprehensive parking concept being developed. Can you tell us about this?

CM: When I got here the thing I kept hearing from the brokers and the building owners was that they couldn’t bring companies down here because they couldn’t park them. These buildings used to have 300-500 square feet per person and park at two to three per thousand. But, today, even the financial institutions only have 170 square feet per person in their new model and you’ve got to be able to get five to seven per thousand in your parking to make it work. And, until the central city is the favored darling of urban development, we’re still competing with places like Scottsdale, Tempe, Chandler, Austin, Denver, and Salt Lake City. Places where they can surface park for free.

We have a lot of vacant space – 2.6 million square fee. of vacant space between Midtown and Downtown. And we don’t want to just fill the buildings, we want to bring the right companies with the right work force. To attract these companies we need temporary solutions until public transportation becomes more common place. We’re getting closer and closer to that, but in the interim we have to provide places for these people to park within four minutes of their building or the companies won’t look at you. We decided to catalog all of the parking in Downtown and Midtown: everything from Buckeye to Camelback and between the 7s. Now, when a building owner calls and says ‘I can do this lease but I need 200 parking spaces for five years,’ I can say ‘here’s six places within a four minute walk where you can buy parking and here’s who you can call.’ And they do.

We’ve now done six transactions where we’ve helped people find parking. We’re going to the city council in September to ask permission to post private transaction information on a public website. Then we will be able to post all of the contacts for all of the buildings, along with rings around the buildings to show a four minute walking distance, and information on who to contact to lease parking in those areas.

Over time we won’t need as much parking, because people will get so used to mass transit that it will do what it is intended to do. But, we’re not there yet because we don’t have all the mass transit connections. As time goes on and we finish making those connections, everyone, or at least a great proportion of people, will move around by mass transit.

DPJ: Are you taking a similar approach to parking in the Roosevelt Row/Evans Churchill area?

CM: In Roosevelt Row for certain….I’m working with Councilman Nowakowski to identify some city-owned sites where we can get some parking up for the next three-to-five-year term while we figure out a structure and what needs to go there. Businesses will die if we don’t get them some parking by end of summer; it’s a ‘now’ priority.

DPJ: What are the main challenges/opportunities you see coming next?

CM: More parking is the challenge that we need to overcome first. It will be a game-changer. Then, I believe what you’ll see next is downtown pushing to the south. When you look at the Warehouse District…that’s the next cool, hip place. The development of the Warehouse District is going to be amazing. Absolutely amazing. ASU Step Gallery at the Levine Machine in the Warehouse District. Photo courtesy of ASU.

DPJ: Any final thoughts about your first ten months on the job?

CM: I am so excited. There’s so much opportunity. The city has done an amazing job since 2007-2008 in driving downtown development, but the vibrancy of downtown really changed with the Super Bowl. Our own citizens in metro Phoenix got on light rail to come downtown for the Super Bowl events and figured out how cool that part of town is.

So, that’s what we’ve been doing for the last 10 months: setting the stage for what we want to accomplish and putting the tools in our tool belt to say ‘now we’re ready, let’s go!’