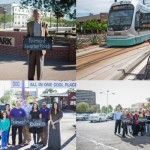 In 2011, funding became available from the U.S. Dept. of Housing and Urban Development (HUD) for cities to do smart growth planning. Phoenix had forward thinking civic leadership, staff, and community partners poised and ready to collaborate and seized the opportunity with a proposal for a bold, transformative program called Reinvent Phoenix. Curt Upton (pictured right) of the City of Phoenix Planning and Development Department was a key leader in the design and creation of this long-term collaborative project with two main goals: create an attractive investment environment in transit-oriented development (TOD) districts along the light rail, and maximize the community benefits from these investments.

Upton points out, “These were very competitive grants. Hundreds of cities applied and only 8% were selected.” Not only that, he adds, “Phoenix was awarded $2.9M, the 4th largest grant in the country.”

At the time of the grant application (2011), Upton contends that Phoenix was still hurting from the recession and “there was a strong feeling that we needed to try something different, to have a time out and think about how to develop our city differently. We’d just invested in a huge light rail project, and we needed to make the most of it.” Thus was born Reinvent Phoenix. The Planning Department was the lead applicant, but “it was very much a collaborative process,” said Upton. “We needed about eight other city departments to participate in the process – streets, parks, art & culture, public works, etc….and we also had to reach out to community partners.”

They began by asking a bold question, “Can we create and implement a vision that can demonstrate a better Phoenix?….As the light rail expands, through this vision can we create a new model for how we develop our city that includes best practices, walkability, and equity – where everyone benefits?” The vision was “not just a place where wealthy people go, not just a café scene or art scene, but daycare facilities, decent housing and healthcare for the people who work in the cafes and neighborhood businesses.”

“HUD awarded us the grant because of both the ideas in the plan and the partners that were brought into process,” said Upton, who emphasizes that these partnerships are significant not just for the purposes of the grant, but in order to have a long-term impact on the city. “That was the hope,” said Upton, “to bring partners into almost a movement, using civic leadership to create coalition.” From Upton’s perspective, “building these partnerships upfront means that everyone has ownership in the outcome. Everyone is invested in the vision and the road map that creates investment and equity for the long term.”

This collaborative model helps dispel what Upton calls “every planner’s fear….that we’ll spend hours, months, energy and dedication to create a plan that just collects dust on a shelf. No one wants that.”

Reinvent is a transformational program – so it needs to have legs over decades. In order to do that it required upfront civic leadership and community engagement instead of top down planning. Upton says, “It’s much harder to do, but if you put the upfront work in, it pays dividends going forward. It’s important to build broad community ownership, so that many people support the plan over time.”

What are Curt Upton’s thoughts about the long-term impact on the City from the Reinvent Phoenix program? He says, “I hope that it helps position Phoenix to benefit over the next couple of decades. There’s a unique historic occurrence in cities going on right now. Two large demographic groups – millennials and baby boomers are converging on the real estate market and they both want the same things – walkable neighborhoods with amenities close by.”

Regarding baby boomers, Upton notes that “A whole generation will be over 65 in the next two decades. Increasingly they will be looking to get out of the suburbs and find ways to live that aren’t as costly and are easier to navigate if you don’t want to or can’tdrive.”

He adds, “At the same time you have the millennials coming in with a different set of preferences than the previous generation. And it’s not just going to be a fad. This younger generation is looking for a different product than in the past.” Upton just returned from a conference in Seattle where he heard the phenomenon described by a real estate fund manager described as “planes in the air, looking to land.”

He explains, “Investors want to invest, but they are looking for good places to land. Cities can position themselves for investment by creating the right conditions for investors to land.” He adds, “Reinvent helps Phoenix take advantage of this historical opportunity to make our city better.”

Upton is a Phoenix native and has spent the last nine years with the City Planning and Development Department. Wednesday, April 29, was his last day, however, as he has been lured to a new job in planning in Denver.

“Denver is similar to Phoenix, but a little ahead of us. It’s an opportunity. I’m a Phoenix native and have lived here my whole life, but I respect the work they are doing in Denver and it is a chance to learn stuff.”

“Nine years ago I took the job with the city for the opportunity to do important work.” In reflecting back, he is grateful for the entrepreneurial, hands off management in the department that empowered him and his staff to do just that.