From the Wire | Phoenix Receives $2.9 Million Grant from HUD to Promote Transit-Oriented Development 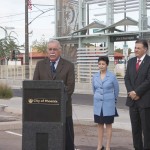 This morning, Ophelia Basgal, regional administrator for the U.S. Department of Housing and Urban Development (HUD), announced a $2.9 million Sustainable Communities Grant to the city’s Planning and Development Department to fund a program to promote transit-oriented development along the light rail line.

“We chose the City of Phoenix’s proposal because the city not only had a great plan – but the right community partnerships and a vision for success,” said Administrator Basgal. “It is with partners like Mayor Gordon and Congressman Pastor that we’ve proven that small investments can yield big results for our economy – and that this debate isn’t about government that’s big or small. It’s about government that’s smart.”

“Thank you to the U.S. Department of Housing and Urban Development for continuing its legacy of investing in the residents of Phoenix,” said Mayor Gordon. “This grant will continue Phoenix’s rise on the national and world stage – to become a model for innovation, sustainability and quality of life for all.”

The city of Phoenix received the fourth-largest grant amount during this funding cycle. HUD received more than $500 million in funding requests from communities in all 50 states, the District of Columbia and Puerto Rico for the $96 million in available funding.

During the next three years, the Reinvent Phoenix Program will promote, encourage and provide incentives for transit-oriented development along the light rail line to provide all residents with safe, convenient access to quality, affordable housing, well-paying jobs, education and training programs, fresh food and healthcare services.