A Conversation with Steve Moore 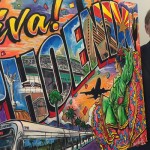 “Customers are seeing that things are happening quickly here”

Steve Moore, the President & CEO of Visit Phoenix (formerly known as the Greater Phoenix Convention & Visitors Bureau) has spent his career luring convention business to his city. After 14 years at the helm of the convention business in San Antonio he was recruited to Phoenix in March of 2002 and has spent the last 13 years watching the explosion of growth in our downtown. He brings a unique perspective to the “future of downtown” conversations around the DPI board table in that he is uniquely focused on customers who are, for the most part, not from Arizona, and not familiar with what he calls “the new city” that is Phoenix. Visit Phoenix is an umbrella organization for hotels looking to fill rooms and their target customers are convention and conference planners of all kinds. The competition includes cities that many planners are familiar with: Las Vegas, San Diego, Denver, Seattle, Salt Lake City and so on. Up until the last few years, Phoenix has largely been perceived as a resort destination and the convention center and hotel capacity in downtown was not competitive .

“Conventioneers like seeing young people downtown; it tells them that there’s a future here and maybe we should come back.”

My how things have changed! As Moore sees it, the “new downtown” is only about six years old because, in that short period of time, downtown has experienced a radical transformation. “There was a cacophony of activity that opened pretty close to the same time,” said Moore referring to the expanded convention center; hotel construction; the growth of a multi-faceted downtown research and higher education campus that includes ASU, U of A, and TGen; and the completion of light rail construction through the core that all came to fruition in and around 2009. “Cities don’t usually move that quickly,” said Moore. “People don’t mess around in Phoenix.” Looking out of his sixth floor conference room window on Van Buren and 5th Street he nods and says, “I see so much difference in just 12 – 13 years, sitting in my office and just looking out at what’s changed.”

And why is Downtown Phoenix Inc. an important organization to Moore? For Moore the impact of DPI is in its ability to get everyone in the same room to have ongoing dialogue about the future of the city, and the tremendous job DPI has done in activating downtown. Additionally, he sees tremendous benefit in having weekly communications from David Krietor and his team. Receiving reliable, aggregated information on everything happening in downtown is an important tool for Visit Phoenix to push out key and timely information to their clients and visitors to their site. He noted that many of the people who use the Visit Phoenix site are locals researching fun things to do with visiting relatives and friends, in addition to the meeting planners who are his target customers.

So what’s his strategy for selling our “new downtown” and raising awareness that Phoenix is a uniquely convention location? “It’s simple,” says Moore. “Seeing is believing. We need to get our customers here. They need to walk downtown and see it first-hand.”According to Moore, it’s all about orienting an audience that doesn’t live here.” Which means, in addition to the outsiders that he’s courting as clients, the millions of people who live in Phoenix and have not yet experienced the new downtown.

“Twelve years ago, I didn’t have to stop for people crossing the street. Now I have to stop all the time, and I love it.”

He wants to show prospective clients that downtown is  “approximate, and like a campus with real nice ‘dorms’ (the hotels) across the street.” He is keen on having them walk at street level so they become more aware of their senses. “Convention planners are not staying inside as much as they used to,” says Moore. “Instead of hosting a golf or tennis tournament, convention planners are looking for social responsibility opportunities for their attendees. They are more focused on giving back to the communities who host them.” And Moore wants that street level experience to stimulate their senses and convey a real sense of place. And he also notes that as a part of the downtown campus experience, “conventioneers like seeing young people downtown; it tells them that there’s a future here and maybe we should come back.”

For Moore and his clients, our downtown is one of our city’s largest lobbies. “We see each other, we are out walking the streets. We want to make visitors aware of their senses when they leave the convention center and walk out on our streets.” He laughs, saying “Twelve years ago, I didn’t have to stop for people crossing the street. Now I have to stop all the time, and I love it.”

As for the specific challenges ahead for downtown and Visit Phoenix? “More hotel rooms,” says Moore. “That, and we need to have marketing resources in place for quite a while.” He is clearly confident about his ability to sell Phoenix as a conference destination well into the future, noting that “customers are seeing that things are happening quickly here – this is a business climate that does move forward and a very pro business community.”

The mural in the above image was painted by El Moises