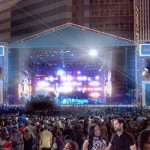 Super Bowl XLIX rolls into Phoenix in just under two weeks and with it comes one of the biggest parties in the world. The best part: that party is being thrown right in the heart of our awesome downtown.

According to Phoenix Mayor Greg Stanton, the city is ready to welcome “a million of our closest friends” to enjoy our vibrant culture and beautiful weather.

Football fans from the northwest, the northeast, and everywhere in between “will visit the heart of downtown Phoenix for family-friendly fun and excitement,” says Stanton. They will experience the flourishing cultural, food, arts and entertainment scenes that we are lucky enough to be immersed in every day. While the two best teams in the NFL will take to the gridiron on Super Bowl Sunday, it has also taken a championship-level team of people to put together this high-profile event. Through close coordination between The City of Phoenix, Downtown Phoenix Inc., the NFL, the Arizona Super Bowl Host Committee, and many others, downtown Phoenix will be ready to shine when things officially kick off over the January 23rd Pro Bowl weekend and throughout the week leading up to the Super Bowl on February 1st. The epicenter of activity will take place at Verizon Super Bowl Central, an entertainment campus encompassing 12 city blocks of downtown, from Monroe St. to Jefferson St., and 1st Ave. to 5th St. The free, five-day event will feature football and Arizona-themed activities, The Grand Canyon Experience rock climbing wall, concerts, autograph sessions, food and beverages, along with the “Kick the Waste” sustainability initiative, one of the most comprehensive waste reduction programs in the history of Super Bowl festivities.

Beyond the borders of Super Bowl Central, downtown Phoenix will show off its unique local culture through TRUE DTPHX from January 23-24, a special event weekend filled with shopping and restaurant specials throughout its various districts and a music festival at Civic Space Park featuring local artists. Downtown will also play host to national TV broadcasts from networks including NBC Universal, the NFL Network, CNN, MSNBC and TV shows like “The Tonight Show starring Jimmy Fallon” and the “Today” show.

From football, to music, to food, to culture, downtown Phoenix will offer endless options for fun surrounding the big game. You can find a complete listing here, but these are just a few of the highlights: When: January 28 to February 1 What: Part of Super Bowl Central, this climbing wall will be a replica of Arizona’s iconic Grand Canyon and measure 30 feet tall by 100 feet wide. It will feature 20 climbing positions and an 18-foot waterfall in the middle.

When: January 24 to February 1

What: Held at U.S. Airways Arena, fans will have the opportunity to watch as players from the Seattle Seahawks and New England Patriots are interviewed by media from around the world. Arizona Cardinals players Drew Stanton and Patrick Peterson will also be in attendance. What: A weekend-long showcase of everything that makes downtown Phoenix unique. A selection of events include:

Read what others are saying about our Super City