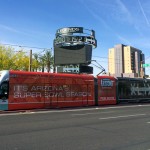 Super Bowl XLIX will be played in Glendale on February 1, 2015, but Super Bowl Central will be right here in downtown Phoenix. In the week preceding the big game, downtown Phoenix will host major events and initiatives centered in 12 city blocks, including the NFL Experience, the NFL Media Center and more. The activities were announced this morning by Arizona Super Bowl Host Committee representatives and Phoenix city officials.

Everyone will be working together to pull out all the stops, showcasing downtown Phoenix’s urban center within the warmth of the desert. “We know how to collaborate, and we know how to do it better than anyone else,” said CEO of the Arizona Super Bowl Host Committee Jay Parry of the relationship between the city and the NFL.

Vowing to be a great Super Bowl partner, Phoenix Mayor Greg Stanton spoke to the unique collaboration of a whole range of partners who are working together, including a city departments, Downtown Phoenix Inc., local businesses, restaurants, community groups and arts organizations. “Super Bowl Central, along with the NFL Experience and NFL House, will turn Downtown Phoenix into the Super Bowl epicenter. It will provide both local and visiting fans an amazing opportunity to be part of this global event,” said Mayor Stanton.

The festivities will spread from CityScape to the Phoenix Convention Center, and Monroe Street to the US Airways Center, anchored by the iconic Super Bowl roman numeral numbers that will tower 30 feet high. Anticipating more than 1 million visitors, David Rousseau, Chairman, Arizona Super Bowl Host Committee, says, “We are thrilled to be providing extensive and engaging events and activities that will showcase the energetic and vibrant culture of Arizona to fans, sponsors and media alike.” Activities throughout the Outdoor Fan Campus:

“Today’s announcement is a testament to the incredible work our downtown community has done to broaden and deepen our urban culture,” said David Krietor, CEO of Downtown Phoenix Inc. “Whether it’s the arts, music or sports, downtown Phoenix is fast becoming our region’s gathering place. I am 100% confident the NFL and the Host Committee will be pleased by the vitality and diversity they will experience in downtown Phoenix.”

Watch the Host Committee’s video depicting Super Bowl Central, and get a sneak peak of downtown as a backdrop to the week-long festivities.