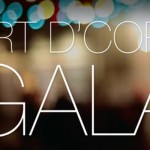 Mayor Greg Stanton will give his second annual speech about downtown Phoenix’s progress and successes at the annual Art d’Core Gala, Saturday, February 21 at 7 p.m. at the Crescent Ballroom.

The gala – hosted by nonprofit, Artlink – will highlight upcoming events in the spring arts season and kick off the 27th annual Art Detour, a two-day celebration of art in downtown. “We’ve worked hard to create a downtown that’s vibrant, walkable and livable – a community where education, the arts and commerce thrive,” said Stanton. “Artlink has been on the forefront of activating this community in a way that enhances the urban experience and engages artists and entrepreneurs.”

“There are many events on the downtown Phoenix calendar, but the Gala is unique,” said David Krietor, Downtown Phoenix Inc. President and CEO. “The energy in that room is undeniable and a testament to how far downtown has come.”

In addition to serving as the formal kick-off of Art Detour 27 (March 7 – 8, 2015), the Art d’Core Gala will unveil three distinctive art pieces inspired by local neighborhoods along the Valley Metro Rail line.

Decorating the Crescent Ballroom will be three, 9’ banners created by Arizona artists representing the neighborhood character of the McDowell, Roosevelt and 12th Street station areas. The featured artists include Lucretia Torva (McDowell), Jeff Jones (Roosevelt) and Robert Jackson (12th Street). They worked with the local community to create these pieces, which will hang at light rail stations

“Visual and performing arts set the stage for this one annual party that celebrates our urban attitude,” said Catrina Kahler, Artlink Inc. Board President. “The event brings together a diverse gathering of artists, entrepreneurs, and the business community in a celebration of the downtown we love and support.”following the event. The effort was made possible through a Reinvent Phoenix grant and in participation with Valley Metro. The program portion of the evening will be opened by a special performance by Phoenix Theatre. The stage design will feature a creative, virtual tour of downtown Phoenix through the lens of visual effects designer, Matt Castleberry. DJ Sean Watson will perform in the Ballroom following the program.

Attendees will also enjoy local food and drink specials created by Crescent Ballroom. The event is complimentary; RSVPs are required.

For more information or to RSVP, visit artlinkphoenix.com.