A Sense of Downtown: The Arizona Room Shows Us Our Past 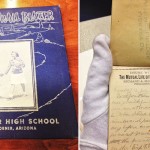 Downtown is more than a grid system of streets and square miles. It is an experience made up of the sights, sounds, feel and tastes unique to the place. In this short series, DPJ contributor, Colin Columna hones in on the five senses as his guide to explore the distinct qualities of downtown Phoenix. Setting our sights on the Burton Barr Library, near the intersection of Central Avenue and McDowell Road, we visit one of Phoenix’s most invaluable, yet often overlooked, resources. The Arizona Room, located on the second floor of the eye-catching Will Bruder designed landmark, houses a meticulously curated collection of books, periodicals, journals, letters, maps and other materials relating to the city of Phoenix, the state of Arizona, and the geology, archaeology, and natural history of the desert Southwest.

The glass sided enclosure is a pre-Wikipedia time portal of first-hand accounts, primary sources, old school sleuthing and, due to the nature of the materials, writing in pencil. Within the archives are newspaper stories and handwritten letters of the westward facing pioneers, fortune seeking miners, prospectors and dreamers, and civic leaders and city boosters who homesteaded, staked out claims and labored to build a new city in the Arizona Territory of pre-1914 statehood.

Arizona Census data on mircofilm from 1870-1930 and extant city directories to 1892 provide researchers and genealogists with the names, relationships and addresses of early Phoenix households. Highly detailed citywide Sanborn maps of the late nineteenth and early twentieth centuries, originally drafted for insurance companies to determine potential liability, today provide urban planners with insight into the historic platting of Phoenix’s streets and neighborhoods and the city’s population patterns of growth and mobility. Historic preservationists reference the maps to determine a building’s significance and historical context. U.S. Army Headquarters records from Fort Verde, Interior Department territorial appointment papers and historic surveyor and topographical maps offer details into the government’s effort to gain control over Arizona’s challenging environment and Native populations. However broad the scope of the collection, each archival document adds to our understanding of Arizona’s progression from Territory, to admittance as the 48th state of the union, to today’s geographic ranking the sixth largest state in the country.

The foundation for the collection began with the 1934 bequest of the personal papers and photographs of James Harvey McClintock. Journalist, historian and member of the Rough Riders, McClintock’s life and exploits read like the stuff of a nineteenth century wild west dime novel. At fifteen, he joined a traveling circus headed for Phoenix and worked as a “barker” in front of the tents erected on an empty lot on West Washington Street. He directed this talent for creating “buzz” in tirelessly promoting his new hometown as President of the Phoenix Chamber of Commerce, President of the Arizona Folklore Society, President of the Arizona Archaeological Society and State Historian. Energetic and ambitious he was member of the first graduating class of Tempe Normal School in 1887, also the town’s Justice of the Peace, one of the three surveyors of the future Roosevelt Dam site, lifelong friend with President and fellow Rough Rider Teddy Roosevelt and 25 year correspondent for the Los Angeles Times. As a journalist he reported on events as he lived them and as a historian he carefully archived all of the clippings. Unlike the library’s Rare Book Collection, no reservations are needed to access the Arizona Room’s 33 linear feet of archival materials, which include the McClintock papers, 25,000 volumes, 2,500 maps, and 73 moving images. The room keeps the same hours as the library and is overseen by Arizona Room Librarian, Maria Hernandez. Possessed with an encyclopedic knowledge of the collection’s holdings and a storyteller’s gift for bringing history to life, Hernandez is more engaging tour guide than academic custodian. She describes the archives as an “ongoing project” and encourages the community to help fill in the gaps within its bookshelves.

“Personal history, family history is the history of Phoenix,” she explains. “High school yearbooks, community cookbooks help tell the story of what it was like to live here. They are valuable records and need to be preserved.”

Next spring the library launches an oral history project to record the memories and life stories of the people who are the life of the city.

“We want to hear from the voices of those who grew up in Phoenix during wartime, the Vietnam War era, who took part in our community’s civil rights movement. We want to hear from people who got up everyday and went to work, who lived their lives in Phoenix. Who remember Royal Wax Museum, who grew up cruising on Central. We want those stories. The city is based on personal experiences.”

Contact the Arizona Room to donate materials and find out more about the Oral History Project.

When: Open during regular library hours

Please Note: Due to the nature of the collection, materials may only be used in the room. Copying of most materials is available at 20 cents per page and pencils only may be used for writing. No food or drink is permitted in the Arizona Room.