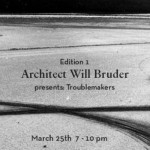 Each event in the series will feature a film presented by a local or national luminary, with proceeds going to a charity of their choosing.

For tonight’s event, architect Will Bruder presents the movie “Troublemakers” and proceeds will fund the Phoenix Library Foundation.

What: “My Favorite Movie” Film Series: Will Bruder presents Troublemakers