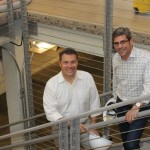 It’s been nearly a decade in the making, but in just a few short days, R & R Partners will be realizing their adaptive reuse dream by moving into their new digs in the Warehouse District.  R & R is a communications agency with nine offices around the country, including Phoenix where they’ve operated for 18 years. The new offices will be relocated to two adjoined warehouses on the southwest corner of 2nd Street and Buchanan, just south of the railroad tracks. The first of the two warehouses was built in 1926 and the second, just inches away, was completed in 1928, by Henry Ong, Sr.

Mr. Ong had opened a store on the corner of 2nd Street and Buchanan in 1915, and a few years later bought the property surrounding the store as investment property. Chinatown was just north of the railroad tracks where America West Arena stands now. He was a smart businessman who made sure that the railroad built a line directly to the buildings, knowing it would make it a more valuable location for businesses that needed to ship goods. Mr. Ong’s investment foresight made him a prominent business leader and one of the original eight founders of the Arizona Chinese Chamber of Commerce.

R & R is creating a special area in the building where the Ong family will be celebrated with historic photographs and information. Mr. Ong, Jr. shares more of his father’s history in this short video. Mr. Ong sold the property in the late fifties and the buildings changed hands over the ensuing years. In 2007, R & R Partners purchased the historic warehouses and began to plan for giving them new life as their Phoenix headquarters.

Matt Silverman, VP and Managing Director of R & R’s Phoenix branch is clearly proud of what they’ve accomplished. “Every little detail hasn’t been missed,” said Silverman, as we started our tour on the sidewalk outside. “Looking at the windows for example, the color on the trim and the bars has all been restored to what it was.”

Gesturing to a a soft brown stripe that goes across the top of the building, Silverman points out the details. “There was a yellow stripe there with lettering for the Trombetta Bros., one of the last active produce businesses in the buildings. The yellow was not original; it was something that business had done. We painted over the yellow, but we cannot replace the sign with a new sign, so we will use old style, painted lettering for our new sign.”

Loading docks have been left and, where needed, re-purposed into entryways for the building. Your eye is immediately drawn to the edges of the entryway where the aggregate from the original concrete has been cut through to accommodate the new use. The rocks in the aggregate are all the colors of the desert and it is stunning both in its natural beauty and its connection to this place.

Once you enter the building, that sense of place is reinforced everywhere you look. The walls are exposed brick and the ceiling has an old industrial skylight and weathered gray trusses. Lead architect on the project, Marty Ball, points out that the many of the trusses were broken. Since they couldn’t be removed, they chose to very subtly bolster the old trusses by creating new trusses side by side and painting them the same soft gray. Unless you are looking closely, you do not notice the double trusses. In one side of the building they were able to successfully remove much of the white paint that covered the original brick, but in other parts, the brick was too delicate and the paint was left, showing that honoring the past of the building is less about bringing it back to its absolute original condition and more about accommodating where history has made an indelible mark.

In order to re-purpose the buildings as office space, perhaps the biggest change to the interior is the large hole that was cut to open things up and create a bottom floor. The new stairwell enables them to make use of the original basement and bring light into the space. The basement ceilings are only eight feet high, so Ball designed ingenious wooden panels that soften space, provide a platform for lighting and hide cabling and infrastructure needed for office space. The panels accommodate the needs of the space without lowering the already low ceiling.

In some areas, like the basement, carpeting has been laid on top of the concrete floor to make it more usable as office space, and in other areas the original concrete floors have been cleaned and slightly polished. This kind of care has been taken throughout the building. Throughout the entire space Ball has done a remarkable job of leaving the industrial character as much as possible, and contrasting new material with old to make the space work for its new purpose.

R & R will move into the space on November 17 and Silverman promises an open house sometime in the first quarter of the new year.  In the meantime, you can see the progress and learn more about the history of the building on the project’s website.