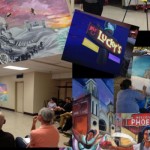 The public is invited to learn about three distinct time periods in Phoenix history, brought to life through intimate stories and iconic photographs shared by Phoenix leaders and authors.

The Phoenix Phabulous Storytelling Salon is free to the on Wednesday, October 29 from 4:30 p.m. to 7 p.m. at the A.E. England Building at the Arizona State University Downtown Phoenix campus. Topics feature the early stewards of Phoenix, the era of air conditioning and shift from agriculture to industry after World War II, as well as unique perspectives unveiling the history of Downtown Phoenix high rises built during the 1960s to mid-1980s.

During the presentations, artists will be capturing the highlights from each of the three topics in order to create additional murals to be added to the Phoenix Phabulous History Mural collection, on display at the A.E. England Building. This indoor mural collection depicts nine time periods in Phoenix history.

The evening is presented by Phoenix Phabulous Experience, City of Phoenix and Arizona State University at the Downtown Campus. The A.E. England Building is located at 424 N Central Ave (at Taylor St.), Phoenix, Arizona, 85004.