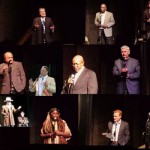 If you want to feel a sense of pride and connection to the place you come from, just listen to the stories of the people who live there. This feeling was palpable last Thursday at the storytelling showcase hosted by Phoenix Phabulous Experience, the Phoenix Center for the Arts and The Arizona Republic’s Arizona Storytellers Project.

Those who gathered at the Phoenix Center for the Arts heard stories from every point of Phoenix’s history: from the earliest days of ancient desert life, through each period that led to Phoenix becoming the modern city it is today and even stories predicting what our future might hold. This event was a critical part of the larger place-making initiative called the Phoenix Phabulous Experience, a project conceptualized by Dr. Carol Poore, who serves as its president and executive producer. The goal is to tell the big story of nine time periods of Phoenix’s history in a widely accessible way.

As a Phoenix native and prominent leader, Poore is deeply engrained in the Phoenix community and felt it needed a unifying piece to create a stronger sense of place.

“How do you tell a big story? It’s through small storytelling,” says Poore.

Or the one told by Ivan Makil about growing up on the Salt-River Pima Maricopa Indian reservation, where Phoenix was seen as the “place over the hill.

Or the one Dr. George Brooks, Jr. told about his father’s connections to the creation of the Head Start program and its introduction in Phoenix.

And Tim O’Neil’s story about why he believes that our rich native legacy, abundant sunshine, education, arts and culture make today’s Arizona the greatest place on earth.

The Phoenix Phabulous Experience will take the threads of these powerful individual stories and weave them into a single tapestry that represents the city’s history.

The first iteration of that tapestry comes in the form of a mural created this past weekend at the Phoenix Festival of the Arts. The piece was created by a team of local artists and led by artist Hugo Medina and will be unveiled during Art Detour in the spring.

The next step is to transform the mural into a large-scale digital installation using 3D projection mapping. This technology has been used in other cities to project cutting-edge 3D videos onto the sides of buildings for promotional events and concerts.

This would create a major visual attraction for downtown Phoenix, one that Poore hopes will become a centerpiece for both locals and visitors to appreciate.

Ideally the installation will make its debut when the Super Bowl returns to Phoenix in 2015.

Ultimately, this will be a collaborative effort amongst those in the business, civic and arts communities and from the individual voices who make up Phoenix’s history.

Poore believes that sharing our stories allows us to understand our neighbors better, and appreciate them as people with ideas, dreams and traditions.

“The small storytelling part of it is just as powerful as the big production.”