PoeFest Thrills and Chills at the Hotel San Carlos 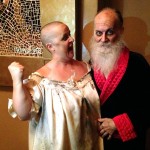 While our changing leaves may not be as colorful as back east, Phoenix has one unique signifier of fall that comes back every year, right on time: PoeFest.

Every October, suspense fans from around the Valley gather to hear classic Edgar Allan Poe stories recited in decidedly dramatic fashion by local actors at the storied, and probably haunted, Hotel San Carlos. This year marks the sixth showing of the local event, which features dramatic recitations of classic Edgar Allan Poe stories such as “The Raven,” “The Red Mask of Death,” and the “Tell-Tale Heart.” Friday night’s premier featured “A Dream Within a Dream” and “The Cask of Amontillado” starring Jim Coates and “The Tell-Tale Heart” staring Laurelann Porter.

Perfect for Poe fans, literature nerds, and adventurous first dates, PoeFest is the creepy brainchild of the Arizona Curriculum Theater (ACT), an educational charity that works in Valley schools to help students learn in new ways with the help of performance. From literature and history, to more traditionally staid subjects like math and science, ACT brings new life to standard subjects and attempts to make education more fun.

James David Porter, the founder and executive director of ACT, said the idea for PoeFest came about thanks to some very disappointing experiences in run-of-the-mill haunted houses.

“I longed for something different in Halloween entertainment. And the idea for PoeFest was born out of that disappointment. I had always loved the works of Edgar Allan Poe, and I had always wanted to perform “The Tell-Tale Heart” on stage,” Porter said.

The first run in October 2009 debuted in a small art space in the Grand Avenue arts district, provided by friends of Porter’s. The first show featured two classic stories, one performed by Porter himself, and a quaint six people in the audience.

“We did four shows over two weekends for the run, and by closing night we were turning people away. The show became very popular very quickly.”

By the third year, the show had outgrown the small space, so Porter began the search for a new venue: specifically, a haunted venue. He soon came across the many stories behind Downtown Phoenix’s Hotel San Carlos.

“At that historic hotel you can walk with all kinds of ghosts from the past – taking up the same space once occupied by Marilyn Monroe, Mae West, Spencer Tracy, Jean Harlow, Cary Grant, Ingrid Bergman, Gary Cooper, Humphrey Bogart, and Gene Autry,” said Porter.

“The history seeps from the walls … It sounded like a perfect place for PoeFest. So I called up the hotel, had a meeting with General Manager Angela Hentz, and she agreed to let us try out one weekend inside the Ghost Lounge. It was such a success that we moved into the Hotel for our entire run the following year.”

After six years, Porter says his nightly audiences are a mixture of diehard fans and newbies looking for a thrill.

“PoeFest is also a fundraiser for our company, and I think our audience really digs that they are not just getting some great Halloween theater, but they are also helping our literacy and arts programs in Arizona schools and libraries. Our audiences care deeply about keeping the arts in schools, and so it’s a win-win for them.”

“PoeFest was a refreshing look at our favorite stories written by Edgar Allan Poe. I loved it!”

Porter started ACT after his work with the Southwest Shakespeare Company and taking part in their education outreach program in area schools.

“We just thought, ‘Why stop at Shakespeare? Why not do Poe, Emily Dickinson, historical reenactments, interactive story-telling, teach math through music, science through dance?’ I read a report that said the arts had declined more than 40 percent in Arizona schools, and there was all of this emphasis on curriculum – and so it was natural to find a way to connect the arts and the curriculum together. Why not use the arts to teach the curriculum? Two birds with one stone, as they say.”

ACT has brought the arts to more than 100 Arizona schools and libraries from Bisbee to Flagstaff,  and have matched private donors to 37 schools in underserved or underfunded areas, schools that could not ordinarily afford professional artists or who have lost their funding for arts programs.

“What better way to learn about the Salem witchcraft trials, for instance, than to take part in a historically-accurate reenactment of the examination of an accused Salem witch?”

Porter hopes to continue traveling to schools across the valley and developing their programs to better serve teachers in classrooms. By continuing PoeFest, they are able to reach out to a new audience, share the goals of ACT, and inspire community support for their efforts.

In PoeFest, however, Porter hopes to finally provide a cure for the common haunted house by creating an Edgar Allan Poe-themed haunted asylum, in which each room features a different story or poem.

“Poe wrote many of his stories and poems as first person narratives, so the transition to the stage was quite natural. His stories sound like the confessions of the kinds of madmen that haunt my own nightmares. I don’t think there could be a more perfect marriage between the stage and classic literature.”

Where: The Ghost Lounge at the Hotel San Carlos, 202 N. Central, downtown Phoenix

Tickets: (for each individual night) $25 – general admission; $20 – students, seniors and military; Festival passes (good for all dates) are available for $38. Buy online.

*Special performances of “The Raven” will be presented on Halloween Night, Oct. 31, 2014 every twenty minutes from 7:30pm-9:30pm at Rosson House Museum, 113 N 6th St Phoenix, AZ. No seating is available, standing room only. (“The Raven” explores adult themes. This show is not recommended for very young children. Parental discretion is advised. Children under 13 will not be admitted without an adult.)