Imagining the Future of Phoenix Transportation 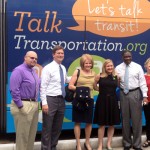 What do you think a flexible transportation future for Phoenix could be? Mayor Stanton wants to know.

The City of Phoenix announced this morning at the Downtown Phoenix Civic Space Park the launch of Talk Transportation – a public involvement process that will create recommendations for a citywide transportation plan for future routes for buses and light rail; maintenance and capital improvement needs for roads and streets; and a proposed funding mechanism.

The Citizens Committee on the Future of Phoenix Transportation was appointed on July 2. Public meetings will be held throughout the city over the next few months and talktransportation.org was launched to encourage everyone to join the conversation. Councilman Valenzuela stressed the economic development impact of the first 20-mile stretch of Metro Light Rail. “It cost 2.4 billion dollars, but has already created a seven billion dollar return…and it’s not just about catching a train to a game, it’s about catching life’s appointments: doctor visits, getting to work, laundry, grocery shopping.” He pointed out that many people in neighborhoods throughout the city either don’t have cars, or cannot drive for a variety of reasons. “It’s not okay for neighborhoods to be living without infrastructure.”

Councilwoman Gallegos thanked Mayor Stanton for his dedication, calling him “the transportation mayor.” She and the others reiterated the importance of multi-modal transportation options and bringing rail to people who choose not to drive, or cannot.

Join this conversation by signing up at talktransportation.org and voicing your ideas, and your vision of the city you want; participate in the community conversations as they are announced; and be a part of building a stronger, viable transportation future for Phoenix. We’ll keep you posted as community discussions are planned. The committee is expected to present their recommendations by the end of the year.