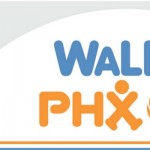 FitPHX and the University of Arizona College of Medicine-Phoenix are announcing a new partnership at a Phoenix park just a short walk from the medical school campus. From 5 to 7 p.m. on Thursday, Sept. 25, the first Wildcat Night @ Verde Park will launch a new tradition in the Garfield Neighborhood. Verde Park is at 916 E. Van Buren St. “Medical students working with kids in the Garfield neighborhood demonstrates what FitPHX can accomplish,” said Councilman Daniel T. Valenzuela. “The school is just two blocks from the park, and this partnership will bridge that short distance.  Our goals with Wildcat Night @ Verde Park are to open the kids’ eyes to the potential of a medical career and introduce them to young, bright students who are eager and excited to bring their knowledge to the community.”

Topics medical students will teach with fun activities include how to have a healthy heart and the basics of good nutrition. Students also will tour the medical school on the Phoenix Biomedical Campus later in the year.

“The city of Phoenix continues to show its commitment to the health of its citizens and our college is ready to support that pledge,” said Stuart D. Flynn, MD, dean of the UA College of Medicine – Phoenix. “The Verde Park project is an excellent example of the partnership between the university and the city of Phoenix and a great teaching opportunity for our students to learn about community health.”

UA College of Medicine-Phoenix also is supporting Verde Park by funding a new WalkPHX sign and mileage markers on the park’s quarter-mile loop. WalkPHX launched in May at eight parks – a new initiative encouraging residents to take the healthy step of walking at their neighborhood park. Thanks to the generosity of FitPHX partners, 15 WalkPHX sites will be in place by the end of October. For more on WalkPHX, a list of site partners and a map of locations, visit phoenix.gov/fitphx and click on the “WalkPHX” link. FitPHX is a citywide initiative, led by Mayor Greg Stanton, Councilman Valenzuela and Olympic Gold Medalist Misty Hyman, with the goal of improving health and wellness in the region and making the Phoenix area one of the healthiest in the nation. For more information on FitPHX and its WalkPHX program, visit phoenix.gov/fitphx.

The University of Arizona College of Medicine – Phoenix admitted its inaugural class of first-year medical students in August 2007 and currently has 301 students training to be physicians. The UA College of Medicine – Phoenix inspires and trains individuals to become exemplary physicians, scientists and leaders who are life-long learners and inquisitive scholars and who will embrace professionalism, innovation and collaboration to optimize health and healthcare for all.