WebPT Spreads its Wings in the Warehouse District 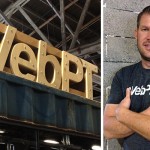 You may not have heard of them yet, but Brad and Heidi Jannenga are creating something remarkable in the Warehouse District, just south of the downtown core. It’s not just a wildly successful business, it’s a way of thinking about technology, work-environments and collaboration that is poised to provide the center of gravity for a whole new level of tech entrepreneurship in Phoenix. But first things first.

Brad and Heidi met on Match.com and began dating. Brad had a tech background and Heidi was a preeminent physical therapist. When Heidi complained about cumbersome billing processes and the cost of dictation for her business, Brad began looking for existing software solutions, only to discover that there were very few options available, most weren’t very good, and all of them were too expensive. “I demo’ed over ten different products,” said Brad, “and they were all just crap.” Brad decided to learn all he could about Heidi’s workflow and documentation needs, and then created a customized program that worked. In the process, they discovered that nearly 80% of physical therapists were still using paper and were hungry for an electronic solution. In 2008, WebPT was officially launched.

What began with two people in the back storeroom of a coffee shop on 7th Avenue exploded with 300% year-over-year growth during the first three years and has continued triple-digit growth every year since. In September 2013, Inc. Magazine named WebPT one of the 500 fastest-growing private companies in America. Today, WebPT is nearing 35,000 clients and they now have 215 people working for the company in a 30,000 square foot space on Grant Street, just west of 7th Street. Additionally, a handful of other folks now work remotely from throughout the country, bringing the total number of WebPT employees to 240. Because of their exploding growth, this is the fourthbuilding that WebPT has occupied in six years, including the storage room of the coffee shop, the Al Beadle complex on 3rd Street (the site of Lisa Sette’s new gallery), the Levine Machine, and their current home just across Grant Street from Levine (and ASU’s new home for the Herberger School of Design).  With each growth spurt, they devise flexible workspace solutions and get by on what they need, so they can focus on customers.

Eye-catching temporary walls are fashioned from IKEA panels, a repurposed shipping container makes for a very cool conference room, and Brad’s dream car (a work-in-progress refurbished 1967 silver Porsche 912) looks right at home on the floor. Brad expects to last about another year in the space they’re in now, before having to expand again. And that’s where it gets really interesting.

Having worked for years in the tech industry in California, Jannenga was used to being in an environment where programmers, software designers, tech entrepreneurs and the like were concentrated in certain geographic areas. People in that environment naturally ran into each other, mingled and shared ideas. They weren’t necessarily in the same businesses, so there wasn’t competition, but there was a recognition of shared challenges and the ability to cross-pollinate solutions. This experience has fed his desire to create a similar community for downtown Phoenix.

Working with Michael Cowley, the owner of the current WebPT location, Brad is developing a vision for growing the tech industry in Phoenix based on building a unique campus for tech creatives in the 100,000+ sq. ft. grocery distribution warehouse next door to Levine Machine, which is also owned by Cowley. He and Cowley are working on a plan to renovate the warehouse that will retain its architectural authenticity, while simultaneously creating an expansive space for not only the still growing WebPT, but for other tech businesses, entrepreneurs, educators, and innovators. The timeline is in place for a beginning move-in next spring.

“The idea (for the new space) is to have a place where companies can come,” said Jannenga. “There are lots of tech incubators and offices in the valley now, but they are all spread out. We need a place where they can all come together….It’s an opportunity to put something on the map, to build the community,” he continued. “The people are here but they haven’t been woven together, the fabric isn’t here.” It turns out that Cowley’s old grocery warehouse is just the place to realize this dream. At fully 123,000 sq. ft, Brad calls it “mind-blowingly huge.” It fits the WebPT aesthetic, and both Jannenga and Cowley are committed to adaptive reuse.

To make such a huge space work, plans include basement classroom space, a rooftop garden, a huge slide from the upstairs conference room down to the main floor, potentially a box car restaurant and an internal “road” through the middle, with streets off to the side and a meandering path. “The plan looks very much like the plan for a city,” said Jannenga, “with real live trees, skylights, street signs for different departments, bike racks, flex space, and a conference room space for each department. Each area will be different neighborhood with its own look and feel.”

“The City of Phoenix has just been amazing,” said Jannenga. “A year, year and a half ago, they came to us and said ‘how can we help?’ and we’ve been working with everybody: economic development, streets, everybody.” Additionally, Jannenga gives a lot of credit to developer Michael Levine for much of what is happening in the Warehouse District, calling him a “pioneer.”

We’re excited to see the Warehouse District coming to life, and we’ll be watching and reporting back as Jannenga’s vision morphs into reality.