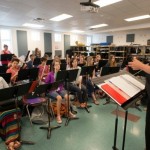 Downtown Phoenix is home to Arizona School for the Arts (ASA), a unique campus where the performing arts are deeply infused into an academically rigorous curriculum. Next week, on the evenings of May 28 and 29, the ASA Showcase 2014 at the Orpheum Theatre offers a special opportunity for the public to sample the range of student talent.

Leah Fregulia Roberts helped found ASA in 1995; she started as a curriculum specialist and English teacher and worked her way up to her current position as Head of School. Scenes from Arizona School for the Arts

“This is a dual program,” says Roberts, describing ASA’s mission as a college preparatory and performing arts school with top-ranked academic programs. English, social studies, math and science form a required core program beginning in the 5th grade. “Middle school students have to take a fifth academic class split between piano for half the time and what we call ‘life skills,’ which is really academic skills, college planning, et cetera for half the period.”

“High school has the same academic core,” she continues, “but they replace piano and life skills class with foreign language. …So they’re getting the most rigorous programs that all college prep kids are getting — the only difference is that their additional programs all center around the performing arts.”

Since ASA students must take piano and choir classes through the 8th grade, says Roberts, “Music is really the foundation.” Older students can choose to focus on an instrument, choir, dance, or theater arts, but those core programs remain equally important.

“I know we have a reputation for the arts,” says faculty member Johnathan Robinson, “but the academics are actually very, very good and strenuous as well.” Robinson is pursuing his doctorate in clarinet performance at Arizona State University, and he’s taught single reed and bassoon studies at ASA since 2011.

“I’m always amazed by the kids because they’re very articulate,” he says. “They get the best of both worlds…public speaking and performance…it transfers over into the music as well. The academics definitely help the arts.” Robinson believes the nurturing atmosphere of ASA sets the school apart. “It’s the culture,” he explains. “It’s a very communal-type base where everyone knows everyone, so we’re all very supportive of each other, and I think the students benefit the most from that.”

Despite ASA’s reputation for elite arts and academics, cutthroat behavior isn’t a problem, says Robinson. “It’s never a super-competitive environment — all the kids applaud for each other after all their tests…I guess they realize where their strengths lie, and what they need to work on to fix it…. I think that…speaks to the culture itself, that we’re very accepting of what we can and can’t do.”

ASA students also enjoy the benefits of partnerships with numerous other arts organizations like the Musical Instrument Museum and Phoenix Chamber Music Society, says Head of School Roberts. “That’s the special sauce on top of a really great arts program,” she says with a smile. “They get exposure to all these other artists…and performances across the Valley.” In this past season, for example, ASA students appeared as the children’s chorus in Arizona Opera’s production of La Bohème.

Graduating senior Max Beckman looks forward to jazz studies in upright bass performance at ASU, but he’s already spent a semester in a combo with Scottsdale Community College, and he plays in a community band with Young Sounds of Arizona.

“I’m very active outside of ASA,” Beckman says. “I have two regular gigs, one at Carly’s Bistro…and one at Copper Star Coffee.” He’s attended ASA since the 5th grade. “I like…the freedom that you have to build your own arts curriculum,” he adds. “I’m choosing to go on with my art forms…I think I was pretty lucky because of that.” At school Beckman participates in Jazz Orchestra, Jazz Combo, and Symphony Orchestra, as well as serving as a teacher’s assistant with low strings.

On May 28 and 29, he’ll play with all three ensembles in ASA’s Showcase 2014 concerts at the Orpheum Theatre, the school’s annual end-of-year production. “We’re playing a pretty cool orchestra piece — it’s called The Firebird Suite [by Igor Stravinsky],” Beckman says, “…and then the jazz combo is playing some cool jazz and hard bop tunes, like Blue Rondo à la Turk and St. Thomas.”

“It’s the opportunity for the students to showcase their arts achievements for the year and for us to really highlight what’s been going on in our programs,” says Roberts, “and it’s also one of the few times…when we get to integrate the arts amongst one another…whether it’s in the massed choir or one of the bigger bands or the combined orchestras; the entire ballet program performs, so it’s every student on the stage.”

“There’s always a theme,” she continues. “This year [it’s] the four elements: earth, water, fire and air, so all selections will embody one of those elements in some way.” Roberts sees the elements as analogies for ASA’s “essential building blocks” of academic quality, arts quality, a culture of safety and excellence, and community partnerships. Although the students perform regularly throughout the year, Showcase is “the big fundraising performance of the year,” Roberts adds. Each night features a different program, but both evenings will include an ASA Theater Department production of Bertolt Brecht’s 1944 play The Caucasian Chalk Circle along with ballet performances set to excerpts from Handel’s Water Music and Music for the Royal Fireworks. Wednesday, May 28 offers a piano arrangement of Wagner’s “The Ride of the Valkyries,” and Thursday night includes orchestral performances of Tchaikovsky’s popular waltz from The Sleeping Beauty and Manuel de Falla’s “Ritual Fire Dance.”

“It’s kind of…a kaleidoscope of everything that we do throughout the year,” describes faculty member Robinson. “You get a tasting of every arts area that we have to offer…it’s like the best of the best.” ASA students finished their final exams on May 21, leaving them free to focus on Showcase rehearsals.

Freeman entered ASA from the public school system. “There was a huge difference,” she says. “When I came to ASA I was asked to analyze…my thought process. It was basically asking me to think in a whole new different way, so that was obviously a tough transition at first, but now I think it’s helped me in the long run through problem-solving….” She adds, “I’ve learned how to work in a group successfully.”

Head of School Roberts points out that, although the waiting list for ASA can be quite lengthy after the 5th grade enrollment, openings for new students often become available between the 8th and 9th grades. “Sometimes…people forget to take another look at us in high school,” she says. Showcase 2014 is a great opportunity to see ASA’s students in action.

All photos courtesy Arizona School for the Arts.

When: Two different programs are scheduled: