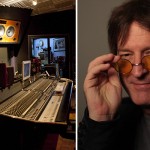 Every city has its hidden gems—those under-the-radar places you walk by a million times, never realizing that history is being made behind the unassuming walls. One such example in Phoenix is Chaton Studios, a state-of-the-art recording studio located near the Coronado district in downtown. The creative force behind this Chaton Studios is Otto D’Agnolo, a record producer, audio engineer, musician, singer and songwriter.

D’Agnolo received his audio production training in the early ’80s in his home state of Illinois before relocating to Phoenix in 1989. Soon after, he went to work at a recording studio in Paradise Valley, then known as Chaton Recordings.

“I worked there for 10 years, and when they wanted to close up shop, I said, ‘should I go to California for a job or build a studio?’ So I offered to buy all their gear and license the name and build my own studio,” says D’Agnolo.

He re-established the business, calling it Chaton Studios, and moved it to its current location in central Phoenix.

In his time as a record producer, he has worked with some impressive talent, including artists like Waylon Jennings, Glen Campbell, Kenny Rogers, Lou Rawls, Nils Lofgren, and Jordin Sparks, to name a few.

D’Agnolo also records and releases his own music, which has been featured on national television shows, like Jersey Shore, One Tree Hill and Punk’d. And due to his undeniable physical and vocal resemblance to John Lennon, he fronts a tribute show devoted to the legendary Beatle called “Working Class Hero.” When he’s not lending his more than 30 years of experience to major label acts and independent artists alike, he’s contributing projects to Phoenix’s creative cache.

He developed a website called therecordingartist.com, which recently featured a live broadcast of local bands producing a track over the course of three hours. Fans bought memberships to the site so they could watch the process unfold. The show featured local artists like Sarah Robinson and the Midnight Special, Banana Gun, Dry River Yacht Club, and Ghetto Cowgirl. The show was in production from 2012-2013, and it is D’Agnolo’s hope that it will be live again soon.

D’Agnolo is putting his experience to work for the next generation of Arizona’s artists. “So many parents have kids with talent and don’t know how to help them. Someone like me can evaluate them and provide objective feedback,” he says.

“One of my hopes is that parents living and working downtown, whose sons or daughters want to pursue a career in music, discover that they have someone right here that they can go to for information and assistance in helping those careers stay on track.”

With his proven track record, he’s shown that artists don’t have to go to L.A. or other larger cities for high-quality music production. “Production work can be done in a lot of places,” he says,  “so I think it’s sad when bands feel like they have to leave the Phoenix market to record. Because they don’t have to.”

Additionally, Phoenix has a wealth of music and recording talent that attracts artists from other cities according to D’Agnolo. “I have a client who’s flying here from San Diego constantly to do his country record because of the musicians here. I have another artist who has been working in Nashville and she’s coming back to work here.”

After years of making records with some of the music industry’s biggest names, helping independent artists elevate their careers, and attracting clients from all over the world to work with him, D’Agnolo has shown that this “hidden gem” is an essential element of Phoenix’s artistic and cultural landscape.