Performance and the Weird 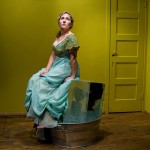 I love when people decide to do weird things. Up high on that list is Bauhaus artist Oskar Schlemmer’s creation, The Triadic Ballet: a freaky dream of geometric costume changes, set design and calculated movements. It makes me happy and scared at the same time. This probably stems from my fascination with the Mummenschanz when they appeared on an episode of The Muppet Show when I was a kid. My expectations for weirdness and the unexpected started early.

In Phoenix, performance is often defined as the performing arts such as the ballet, the symphony or the theater at the Herberger or, more generally, theater. Current and former artists here like Angela Ellsworth, Erin Sotak and Kjel Alkire have challenged and expanded on this concept with works that sometimes involve voluntary audience participation, dance or role-playing. The former Future Arts Research (regardless of your feelings about them) brought several performance-based artists to town, including Franco Mondini-Ruiz, Anna Deaveare-Smith and even Joanna Berzowska, who’s adaptable costumes almost perform themselves. However, any moment in our lives could be a performance. The potential for this performance becomes even greater when you include the element of intention. It becomes more widely received when that performance takes place outside of any stage or the confines of the expected. Within the realm of performance art, I see it as an opportunity to see what is possible within the self or in the social contracts we invisibly hold with each other. Have you ever had the odd moment when you witness someone behaving in public in a way where you wonder if it is intentional or accidental? Artists can and have used this moment of the unexpected to their advantage to re-frame the spaces we exist in.

It has been my experience in Phoenix that you can get away with a lot before someone of authority realizes what’s going on. This freedom opens up the possibility for our artists to expand their practice, step out into the urban environment and conduct impromptu works that bring the concept and aesthetic directly to the public. If Francis Alys can push an ice block around Mexico City until it completely melts, we can enact comparatively relevant works about the Phoenix urban core in our urban core. Think of all the vacant spaces that can be enacted temporarily with a performance.

Previous bursts of experimental performance that expanded our concept of what performing meant (Russian Constructivists, Bauhaus, Dada, Fluxus) emerged after tumultuous periods of war, financial disarray and social unrest. When you have nothing else—no materials or studios, you still have your body. Our housing market has collapsed, unemployment is high and Phoenix is notorious as a gathering ground for those leaving other places for a new beginning. I couldn’t think of a more ripe environment to harness a desire for something innovative, challenging and, of course, weird.