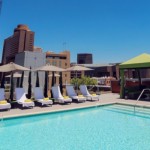 Denver Broncos or Seattle Seahawks? To many football fans, this is the most pressing question leading up to Sunday’s big game. To others, it’s which car company will have the most outrageous commercial, or if Bruno Mars will live up to Beyoncé’s power-outage inducing half-time performance from last year.

For Mayor Greg Stanton, the question was how to enjoy the game and showcase how Phoenix will welcome visitors for next year’s Super Bowl here in the Valley. To begin the countdown to 2015’s Super Bowl XLIX, Stanton—in partnership with Downtown Phoenix, Inc.— is inviting everyone in the Valley to his Super Pool Party on Sunday at Hotel Palomar‘s Lustre Rooftop Garden, beginning at 2 p.m. Mayor Stanton will speak at 4 p.m., welcoming guests and starting the countdown clock for the 2015 Super Bowl return to Phoenix.

“The Phoenix region is ready to play host for Super Bowl festivities next year,” Stanton said. “Our Super Bowl party will be a great way to enjoy the game and remind people what a fantastic place Phoenix is this time of year.” While the majority of the country has been experiencing a winter of record-breaking low temperatures, Phoenix has been basking in above-average temperatures and not even a drop of rain. While the East Coast braces for another blizzard, and sportscasters stand on the sidelines dressed as if they were hitting the slopes, Stanton and DPI couldn’t envision a better way of showcasing the Valley’s temperate winters than an afternoon poolside.

Downtown Phoenix, Inc.’s CEO David Krietor shares the mayor’s enthusiasm: “Downtown Phoenix is the front door to our region, so what better place to have a party on Super Bowl Sunday. It will be good practice for 2015.”

Lustre will be serving a tailgate-inspired menu that includes mesquite-smoked brisket sliders, buffalo chicken wings, and buckets of beer for you to eat and drink while lounging by the pool, enjoying the game on the big screen. Additional party guests will include Arizona Cardinals players Alameda Ta’amu, Franks Sanders and Anthony Clement (maybe they’ll be the ones on the field next year?), and the Arizona Rattlers Sidewinder cheerleaders, ensuring festive football fun.

Where: Lustre Rooftop Garden at the Hotel Palomar, 2 East Jefferson