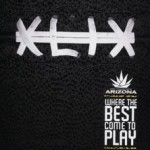 When representatives went to pitch the Valley of the Sun as the 2015 Super Bowl host site this past fall, the playing field was vastly different from when the city hosted the last one in 2008. The site selection process had changed significantly, with the final choice narrowed down to only two cities: Tampa and Phoenix.

But the real game changer for the 49th Super Bowl, according to everyone involved, was that Downtown Phoenix had evolved from a sprawling construction zone to a world-class, truly Super Bowl-worthy destination. Among the changes:

The NFL Experience could be held in Downtown Phoenix when the Super Bowl returns to Arizona.

“The transformation of Downtown Phoenix was a significant part of our pitch.”
— Mike Kennedy, Arizona Super Bowl Host Committee

“All the team owners that were voting hadn’t seen downtown since 2008 so we did our best to describe it to them,” he said.

They were assisted by sophisticated marketing materials and a killer video, thanks to the efforts of the local marketing and advertising agency E.B. Lane.

“We really made a point of noting all the development – retail, entertainment, restaurants, housing and transportation – that has been finished since 2008,” said Beau Lane, chief executive officer of E.B. Lane, which represents the Super Bowl Host Committee, the Arizona Cardinals and the Greater Phoenix Convention & Visitors Bureau.

“One of the concerns last time, even though it was very successful, was that the events were spread out all over the Greater Phoenix area,” he said.

“This time we see that heartbeat of all Super Bowl activity taking place Downtown. We have the capacity and the facility infrastructure to support it.”
— Beau Lane, E.B. Lane

“This time we see that heartbeat of all Super Bowl activity taking place Downtown. We have the capacity and the facility infrastructure to support it.”

Michael Bidwill Scores as MVP
However, according to Kennedy, the final host decision came down to which owner could gather the most National Football League votes.

Arizona Cardinals President Michael Bidwill touted the University of Phoenix Stadium in Glendale to the 32 NFL team owners that were gathered in Houston. He also talked about the hotel, resort and tourism infrastructure. And, according to those in attendance, he was particularly persuasive when speaking about what Downtown Phoenix has to offer.

According to those in attendance, [Michael Bidwill] was particularly persuasive when speaking about what Downtown Phoenix has to offer.

Neither Arizona nor Tampa received the requisite 24 of 32 votes the first time around. With the second vote, only a majority was needed.

“It all came down to which owner could gather 17 votes – and that was Michael Bidwill,” Kennedy said.

A Stamp of Approval
Being a Super Bowl host site means a lot of things, not the least of these being an estimated $500 million economic impact to the state. There is also the opportunity to turbo charge the state’s tourism and visibility, bringing thousands of visitors from around the globe.

But for Downtown Phoenix, Super Bowl 2015 will play a unique role, a glamorous debut on the world’s stage.

“When a downtown is at a Super Bowl level, it says something to meeting planners, as well as everyone else,” said Mayor Greg Stanton. “We have a world class facility with our convention center and the capacity for all the media outlets to make Downtown their home.

“Downtown Phoenix is already a great destination,” he added. “This is an extra stamp of approval.”

Agreed Jeff Moloznik, CityScape’s General Manager, “This is affirmation that Downtown has finally arrived, when you can tell a major international event that they will be hosted in Downtown Phoenix and that it is the epicenter of the Super Bowl.

Building on Infrastructure
Moloznik sees CityScape as being the “hub of the wheel” for all NFL festivities. In addition to all the activities that will be slated to take place at CityScape, it will be a central meeting place and clearinghouse for all Super Bowl-related information.

“When a downtown is at a Super Bowl level, it says something to meeting planners, as well as everyone else”
— City of Phoenix Mayor Greg Stanton

He noted he will be part of a group  flying out to Indianapolis to see how it creates an NFL fan zone and experience. He pointed out that “a lot of infrastructure will be coming on line” in the next few years at CityScape, from temporary and permanent stage structures to large format, 40’ x 20’ screens, scheduled to be installed this year.

Then there is the matter of the estimated $18-$20 million that must be raised over the next few years, which covers the cost of taking care of the clubs, hosting the parties, securing facilities and other expenses. The funds that were raised for Super Bowl 2008 were solicited before the recession hit.

Mayor Stanton, who emphasized that Phoenix will be working in close partnership with its neighboring cities for all aspects of the Super Bowl, noted that Phoenix will have significant direct and indirect expenses, including the costs of security and police officers.

“This is affirmation that Downtown has finally arrived…”
— Jeff Moloznik, RED Development

“I’m sure we will be asked to pick up the phone and make a pitch to some of our large corporate donors,” Stanton said. “We also expect the NFL to be a partner during these difficult economic times.”

Lane said sponsorship packages are already being developed and there is usually a number of events that take place the year before the Super Bowl as well. “Our strategy is to provide significant value so they receive a return for their investment,” he said.

And while Kennedy referred to raising the needed funds as a “daunting task,” it is one which he also believes will reap major returns.

“Short of the Olympics, there is no other sporting event that has the visibility and impact of the Super Bowl,” he said.