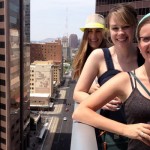 The boards of Downtown Phoenix, Inc. (DPI) and Downtown Phoenix Partnership (DPP) continue to work on the legal documents that will allow the full consolidation of our operations this summer. We are also working closely starting this summer with the Roosevelt Row and Evans Churchill communities as they evaluate the opportunity to establish a second Business Improvement District.

I want to thank Ed Zuercher, Phoenix City Manager and DPI Board Member, for his calm, steady leadership in advancing a new budget for the City of Phoenix. Remarkably while city-wide tax revenue continues to stagnate, revenue from the downtown area has dramatically accelerated supporting services all over the city. Might there be lessons we have learned downtown that could be applied in other parts of our city? This is something to ponder and discuss at future get-togethers.

The Downtown Phoenix Journal “Conversation” series consists of interviews with DPI board of directors and other downtown stakeholders. DPJ Associate Editor Jill Bernstein sat down with Mike Ebert, a founding partner of RED Development, the real estate development firm responsible for building the two-block CityScape project.

The University of Arizona and City of Phoenix announced plans to construct a $136-million research building on the downtown Phoenix Biomedical Campus. The 10-story Biosciences Partnership Building will be situated at Seventh and Fillmore streets, just south of the Arizona Cancer Center now under construction.

Habitat Metro and Sunbelt Holdings announced plans to build Portland on the Park, a $75 million condominium development. Portland on the Park will feature 170 units, ranging in size from 745 to 2,381 square feet, in towers of four, 12, and 14 stories. Rendering of Portland on the Park. Courtesy of DAVIS Architecture.

Groundbreaking for the new Arizona State University Arizona Center for Law and Society on the block in-between Polk and Taylor and First and Second streets is scheduled for July 7, 2014 (although the date of the groundbreaking ceremony has yet to be scheduled). A Home to Serve Others

BHHS Legacy Foundation has created a convenient and cost-effective space in midtown Phoenix to house non-profit organizations whose mission is to improve healthcare for people in need. Legacy Place at 360 E. Coronado Rd. is home to the Legacy Foundation, Legacy Connection, Experience Matters, ALS Association (Arizona chapter), National Kidney Foundation of Arizona, and Mission of Mercy. Room is available for other similar non-profits.

DPI and DPP representatives testified before two Phoenix City Council subcommittees on issues that have been recognized as key priorities of DPI’s Community Advisory Panel and the boards of DPI, DPP, and Phoenix Community Alliance. Under the “improving connectivity” banner, overall support with a couple suggestions was given on the Downtown Phoenix Comprehensive Transportation Plan before the Downtown, Aviation, and Redevelopment Subcommittee. Regarding “improving place,” overall support to the Neighborhoods, Housing, and Development Subcommittee was given for a pilot program to develop additional parklets in the downtown core and Grand Avenue. A parklet is a small space that serves as an extension of a sidewalk to provide amenities and green space for people using the street and sidewalk. The first example in Phoenix is located in front of Matt’s Big Breakfast in the Evans Churchill neighborhood.

On May 12 we lost a strong and tireless advocate for Phoenix’s neighborhoods. Donna Neill, founder and long-time head of the Neighborhood Activity Inter-Linked Empowerment Movement (NAILEM), a neighborhood organization based in west Phoenix’s Westwood area, died after a long battle with congestive heart failure. Donna was a force of nature and will be sorely missed. I’m continually amazed at the “hidden gems” I hear about someone, some place, or something unique in and around our downtown that, really, everyone should know about. Here are two music-related gems I’ll spring on you: Chaton Studios, a recording studio near the Coronado Neighborhood where records are made with some of the music industry’s biggest names, and the Roberto-Venn School of Luthiery on Grand Avenue, one of the top guitar making schools in the nation.