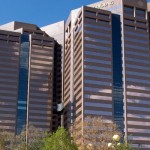 Super Bowl XLIX is scheduled to be played at University of Phoenix Stadium on February 1, 2015, marking Arizona’s second Super Bowl in seven years.

Hines Managing Director Chris Anderson said, “We are honored that One Renaissance Square is the official headquarters building of the Arizona Super Bowl Host Committee. They are an outstanding addition to an already world-class tenant roster.”

“Renaissance Square is one of the premier office buildings in Phoenix, and we are thrilled to call it our new home for the next year. We look forward to hosting the world’s biggest single-day sporting event in 2015, all the surrounding activities, and the 2015 Pro Bowl,” said Arizona Super Bowl Host Committee Chairman David Rousseau.

Renaissance Square is leased to large corporate tenants, such as Bryan Cave LLP, Ernst & Young and Quarles & Brady LLP, as well as many GSA tenants and prominentlocal businesses.