Wire | Super-Sized Clock Counts Down to the Big Game 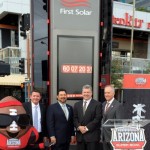 To build on the growing momentum and anticipation of Super Bowl XLIX the Arizona Super Bowl Host Committee and First Solar, Inc. unveiled the First Solar Countdown Clock in downtown Phoenix this morning. Over the next 60 days, the technologically advanced clock will provide the countdown to kick-off and keep fans “in the know” about events and activities coming up on the free, 12-city block fan campus known as Super Bowl Central. The super-sized timepiece stands 13 feet tall, is made of aluminum and steel, and illuminated by more than 200 feet of LED lights. The First Solar Countdown Clock will display updated video content and a countdown to the kickoff of Super Bowl XLIX. It features three, 55 inch ultra-bright LED displays and nine First Solar panels, which were manufactured at the company’s US production facility outside of Toledo, Ohio.

First Solar is also a partner of the Host Committee’s volunteer program. With the support of its employees, it is currently the largest single corporate volunteer group for the Arizona Super Bowl Host Committee.

The First Solar Countdown Clock is located on the northeast corner of Jefferson and 1st Street, which will be the heart of Super Bowl Central. The free, football-themed, pedestrian and family friendly fan campus will feature a multitude of daily activities such as outdoor performances by local musicians and national recording artists, an autograph stage, the iconic Super Bowl XLIX Roman Numerals and a beer garden. It will run from Wednesday, January 28 through Sunday, February 1, 2015.

In November, the Host Committee unveiled the first Super Bowl Central attraction on the corner of Central and Washington. The super-sized football towers more than 20 feet high, measures more than 32 feet around and weighs more than 7,000 pounds. Fans are encouraged to visit both monuments, take selfies, share them on social media using #sb49 and make their own Super Bowl XLIX memories.