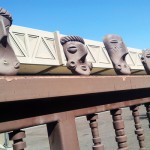 I love stumbling on secret delights in cities – the odd alleyway, a hidden bench behind a bushy shrub, or a work of art where you least suspect it.  My early years in Phoenix were marked by dismay that I couldn’t get out and wander about as a pedestrian. I got a dog and walked my residential neighborhood, but I specifically craved city streets and their eccentricities.

There was, however, one thing about Phoenix that gave me hope for the great city it would become – its world class public art. Even 21 years ago when I first arrived, Phoenix was way ahead of the game in making art an integral part of its bones, especially given the irony that, at that time, the city was exploding with gruesome suburban sprawl.

But the public art was a revelation and, over the years, innovative public art throughout Phoenix has continued to shape the way our beautiful city feels.  One of my favorite tucked-away examples in the heart of downtown is The Hohokam Camshaft Gates.

This wonderful, but easy-to-miss piece is a perfect combination of art and infrastructure. In 1994, Phoenix artists Bob Adams and Michael Maglich were commissioned to collaborate on the design and fabrication of gates for the loading area of the Phoenix Convention Center. They hit the nail on the head with a concept and execution that always makes me smile.

The spindles for the gates represent diesel truck camshafts, a nice nod to the importance of the trucking industry in the operation of the Convention Center. The masks that top the gates pay homage to the Hohokam people, the first Phoenix urban dwellers. The masks were sculpted by C. Matt Thomas and are enlarged reproductions from prehistoric Hohokam figurines. Kudos to everyone on this project! The end result is a functional, but beautiful gate on the backside of the convention center, where visitors aren’t as likely to be wandering. It comes as a happy surprise for those who do stumble upon it.  And when you stop and take it in, it tells an authentic story about this particular spot and the role it plays in our city. I love it because it isn’t grand, but it is integral. Stroll by and check it out. (A side note: when the Convention Center was renovated and expanded in the mid-2000s, half of the gate was moved to the Shemer Center.)

What: The Hohokam Camshaft Gates