A Conversation with Tim Eigo 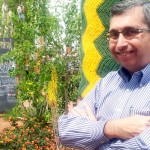 “The important lesson is that we have to hold our principles dear.”

Tim Eigo is a longtime community advocate who moved to Phoenix and settled in the F.Q. Story neighborhood 17 years ago. Both of his daughters, ages 12 and 17, attend Arizona School for the Arts and over the years he has been deeply engaged at a community level in helping to create a stronger, more livable city. He currently serves as Chair of the Downtown Voices Coalition (DVC) and as a board member of Downtown Phoenix Inc. (DPI).

DVC grew out of a day-long facilitated discussion about the future of downtown that took place in May 2004 with a wide variety of stakeholders at the Icehouse. For ten years they have continued to meet and promote a vision of a downtown that embraces the arts, affordable housing, historic preservation and locally owned businesses.  He refers to himself and his community advocate colleagues as “neighbors,” which characterizes his deep commitment to the DVC vision. When asked to name the key changes have invigorated downtown, Eigo points directly to leadership, but he remains a little wary about whether we’ve actually made enough progress.  “The thing that invigorates cities are leaders who get it, who understand what a city is, what urban dynamism is, and who are willing to work to make it happen,” he said. “And I don’t want to say that we’ve got it yet. I’m still not sure we’ve got it.”

“The thing that invigorates cities are leaders who get it, who understand what a city is, what urban dynamism is, and who are willing to work to make it happen.”

Yet, he admits there has been progress. “On my best days, when I see spaces and minds that get it, it makes a difference. When I am having a bad Phoenix day and I walk into the Burton Barr Library, or stand under Her Secret is Patience (the public art sculpture in Downtown Civic Space Park) I think that every now and then we do get it.”

What are the important lessons that have been learned over the years? “The important lesson is that we have to hold our principles dear,” he said. He points out that the impact of the recession has been fortunate, in a way, because it caused business and government leaders to be a lot more aligned with DVC values. “It’s easy to believe in small grain, local development and not just major projects when no developers have any money,” he says.

As the recession eases and developers have more money, however, he’s cautious about what will come. “I’m watching to see how much that commitment sticks. So far, I am not so confident,” he said.  He pointed to the recent city-backed proposal to build the Pin at Heritage Square as an example of why he’s a bit skeptical of the progress in downtown. “It boggles the mind that the hardest question put to the group that brought it (the Pin) forward to the City Council was ‘can you have it built by the Super Bowl?’ As a neighbor, that’s an eye opener, that our elected leaders are at this low level of engagement on important items.”

On the other hand, he’s quick to recognize that another lesson we’ve learned is that engagement actually works. When citizens are engaged, good things can happen. As an example, he mentioned the development of light rail, which he and many others were involved in planning. “Light rail has transformed the valley.”

What are the most important steps we can take to continue developing a vibrant downtown from Eigo’s perspective? “For me, as a neighbor,” he said, “it comes down to transparency. Don’t lie to people. If there are opportunities to make positive change in the city, don’t tell us it’s a blank slate and all ideas are okay if they’re not. We’ve all participated in public charrettes that went on for six months and it turned out there was a plan in someone’s desk all along that they were going to adopt. We need to stop that sort of thing.”

The other step we need to take is bigger than just Phoenix, in Eigo’s view. “Nationwide there’s kind of a war on cities, on downtowns. Even in our own city council, we have a lot of suburban council people who don’t get downtown and don’t feel that they have to get it. They don’t even recognize downtown as an economic engine, which it is. And it’s not just Phoenix. This is happening across the country,” he continued. “And neighbors and urbanists need to band together and keep touting downtown.”

“I don’t think Arizona will be a significant stakeholder in any kind of national conversation if we don’t tout Phoenix and advance Phoenix. It is an enormous economic powerhouse.”

Why is a vibrant downtown so important? Two reasons, according to him. “I don’t think Arizona will be a significant stakeholder in any kind of national conversation if we don’t tout Phoenix and advance Phoenix. It is an enormous economic powerhouse.” The second reason a vibrant downtown is important is, as he puts it, “generational.” Looking to his own family, Eigo mentions that neither one of his daughters wants to stay in Phoenix after they are grown up. “They may change their mind,” he notes, “but when I try to marshal arguments for staying,  I sometimes have a hard time. If we really want people to remain and contribute and not have a brain drain…we have to have reasons for them to stay.”

What challenges does Eigo see on the horizon? “The economy is getting better and we’re going to have to look inside to see that we have urbanist principles that we trust and are going to live by, from city hall right through community groups,” he said. “And we need to have a commitment to our historic structures.”

Eigo is excited to be a part of Downtown Phoenix, Inc. “DPI is a cool ‘laboratory of democracy’ kind of experiment. Getting these usually separate people (powerful corporate leaders and community-based leaders) in a room together….over time we begin to realize that we do overlap in some places. We discover that we have similar ideas about what makes a great city.” He knows that it doesn’t mean they will always agree on the strategy to achieve a great city, but recognizing the overlap is “very cool.” Still, Eigo appears to be cautiously optimistic.

“The potential (of DPI) is huge,” said Eigo. “If we could have similar principles that we share…to speak with a single voice about what makes a livable, sustainable city, that would be great.” Speaking of his own role on the board, he said, “I think what I, or any community member brings is honesty. They (corporate members) live in a complex world and they represent huge organizations – I don’t. We need to provide an honest wake up call: what flies, what doesn’t fly; what’s transparent and what’s opaque; what is truly sustainable and what is big box. If we’re not willing to look at things like CityScape and learn from them, then what’s the point? There’s plenty of cheerleading in this city already, that’s not our role.”