A Conversation with Michael Nowakowski 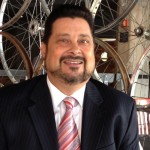 “These events…are all about celebrating life, culture and each other.”

Spend just a few minutes with Phoenix Councilman Michael Nowakowski and you immediately feel his passion for this city. He’s lived here since he was two and a half years old (that’s 48 years for those of you who are counting), and his unique Polish (father) and Mexican (mother) heritage has given him deep insight into how to build common ground between people who may not immediately recognize their shared bonds.  As he puts it, “When I was running for City Council and out knocking on doors, my Polish/Mexican heritage made it easier to move beyond color and language differences and find common ground. We shared so many things; both cultures are Catholic, family-oriented, and there’s even the polka we share.” For 15 years he has run the Cesar Chavez Foundation‘s nine radio stations, which generate three million dollars per year for the foundation. The revenue supports affordable and senior housing and social services. It’s another area where he is focused on building common ground. His experience running the foundation stations and meeting large budgets has given him, as a moderate Democrat, a good understanding of the business side of things.

“There was always something happening downtown. Festivals, music, celebrations, events, and I wondered, ‘why can’t we do that in our downtown?’“

As both a Phoenix City Councilmember and a Downtown Phoenix, Inc. board member, Nowakowski is a fan of DPI. He’s particularly enthusiastic about the role DPI can play in supporting and promoting events in downtown. “Growing up,” said the Councilman, “we use to go to Detroit every summer for several weeks. There was always something happening downtown. Festivals, music, celebrations, events, and I wondered, ‘why can’t we do that in our downtown?’”

He sees DPI as a critical way to create and support an environment where there’s always something going on in downtown.  “People want to come downtown, they want to have things to do. They want to be a part of things,” he continues. “These events – First Fridays, Zombie Walk, Tamale Fest, etc. are all about celebrating life, culture and each other.”

Additionally, he sees DPI as an important advocacy group. “DPI is able to bring all these communities – small business, the arts, community orgs, and big business – together and everyone has a voice. They can begin talking to one another and to recognize their common goals,” said Nowakowski. “What happens on the northern side of Van Buren impacts what happens below Van Buren (in the existing Business Improvement District),” he continues. “DPI has been able to reach all of these constituents and get them talking to one another, giving them ways to collaborate.”

“DPI is able to bring all these communities – small business, the arts, community orgs, and big business – together and everyone has a voice”

We asked him about the the opportunities and challenges for the city with the coming NFL Pro Bowl, Super Bowl and ancillary events. Like other leaders we’ve spoken with, Councilman Nowakowski sees an opportunity for changing public misperceptions about who we are and what Arizona is all about.

“The Pro Bowl and Super Bowl are a way to tell our story throughout the world. Not just to the people who are coming for the game, but major outreach to business leaders from around the world,” he said. “It’s an opportunity,” he continued, “to change our image and show decision-makers and CEO’s that this is the perfect place for, example, their data centers. Put them underground; think outside the box. Once they bring a data center here, they will experience our quality of life and the next thing you know, they’ll bring their headquarters.”

Additionally, Nowakowski believes that its important to have plenty of free things for people to do in conjunction with the Super Bowl and Pro Bowl. Visitors from around the Valley will be coming downtown as well, and for many of them it will be their first time, or their first time in a long time. With plenty of free events, Nowakowski believes that “everybody will get to join in the experience and take pride in our city.”

For many years Nowakowski lived in an historic neighborhood in downtown, but after six kids, he needed more space for his growing family and they relocated to Laveen. He still spends much of his time at the Chavez Foundation offices on 15th Street and Washington and walking the streets of downtown.