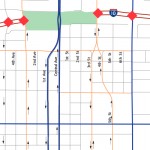 The city of Phoenix Street Transportation Department is seeking input from residents, commuters and business owners on proposed changes to the downtown streetscape to improve traffic circulation, make it easier to access public transportation, and increase economic development potential for local businesses. The changes, such as transforming some one-way boulevards into two-way streets, resulted from a study of a variety of transportation-related elements in the city’s core, interviews with stakeholders, and meetings with community focus groups. Proposed changes would be phased to accommodate five-year, 10-year, and longer development timeframes. At the meetings staff and consultants will be available to answer questions and solicit comments on the changes. Using feedback from these meetings, the city and Maricopa Association of Governments will finalize a proposal for a downtown transportation plan to be adopted by the Phoenix City Council.

The plan area encompasses downtown Phoenix, bounded by McDowell Road on the north, Buckeye Road on the south, Seventh Avenue on the west, and Seventh Street on the east. It also will include the freeway loop between Interstate 10 (I-10) and Interstate 17 (I-17) surrounding the downtown core.