A Conversation with Mo Stein 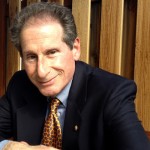 Like many of the people who are dedicated to creating a vital downtown for Phoenix, Mo Stein wears a variety of hats. Currently he is an architect with HKS, Inc., and the chairman of the leadership committee for MyPlanPhoenix. Additionally, he is chair of the Phoenix Community Alliance (PCA), an organization of business leaders with a mission to create a dynamic downtown for Phoenix. He serves on the Downtown Phoenix, Inc. board of directors in that capacity. His involvement in downtown Phoenix has been ongoing for nearly 30 years.

We sat down with Mo at the Phoenix Public Market Cafe, one of his favorite spots, to talk about his longtime involvement with the PCA. We were interested to hear his insights on the changes he’s seen during that time and to learn a little about his perspective on what it takes to build a truly great downtown core. When asked about the significant milestones that have helped contribute to a vital downtown, Mo pointed to the work done by the PCA that laid the groundwork for the development of projects such as the Arizona Center and CityScape, and praised the early commitment of Jerry Colangelo in creating major sports venues in downtown. “Jerry’s commitment, in terms of sports in downtown, was significant. He put a sword in the sand that this what what we needed to do and he made it happen.”

“The investment we need in downtown is not just financial, it’s personal. There needs to be a lot of lifting to make it work, both big and small, and we’re all in it together.”

He also pointed to the strategic plan for downtown that the Phoenix Community Alliance created in the early 2000’s. “We believed it was critical to have a credible, business-driven plan for downtown that would excite people and that could be implemented. We raised $750,000 to fund development of the plan and handed it to the city.”

“The most important lesson we learned,” he continued, “was the need to build teams. In downtown, there are lots of constituencies and we have to respect all of those constituencies. It’s not just about the people who work in big buildings with their names on them, downtown has to be a place for people who don’t have their names on buildings and who work in small places, but are making a big contribution to the life and fabric of the city.”

Stein believes that an important next step for downtown development involves making “a place at the table for everyone. The investment we need in downtown is not just financial, it’s personal. There needs to be a lot of lifting to make it work, both big and small, and we’re all in it together.” For him, making a place for everyone means supporting small business as well as big business. “If we’re really tired of empty storefronts downtown, let’s fill them with people who want to be in them.”

One way of doing that, from Stein’s perspective, would be to streamline the process for getting a building permit in downtown.  “Let’s draw a circle around downtown from 7th Avenue to 7th Street and from about Jackson to McDowell and then let’s guarantee that within that circle you can get a building permit within four weeks. Let’s put our money where our mouth is.”

When asked why he believes that a vibrant downtown is so important he talked about the hundreds of conversations he’s had with people throughout the city. “Every city needs a special place and that special place has to be downtown. Everyone we ask believes that. Downtown is the heart of the city and if the heart doesn’t work, the city doesn’t work.”

Truly a “citizen planner,” Mo Stein understands that a strong city plan needs broad-based citizen participation in order to succeed.  Interested citizens can participate in several ways, including  membership in Phoenix Community Alliance, and participation in MyPlanPhoenix, an online city initiative to develop the next general plan for Phoenix. As chair of the leadership committee of MyPlanPhoenix, Stein is proud that over 13,000 people have weighed in on the website and in public meetings so far with their ideas of what Phoenix needs. The interim report for MyPlanPhoenix was published online last week, but there is plenty of time between now and the publication of the final plan in February 2015 for everyone to weigh in with their ideas for how to make downtown a vibrant special place, and the heart of our city.

With all of his involvement in helping to nurture a vibrant downtown, Stein doesn’t have as much time to practice architecture as he had in the past, but as he tells his architecture students, “the best thing we can learn from a design education is how to solve really tough problems.” His dedication to building an extraordinary downtown lets him put these skills to excellent use.