Circle K Circles Back to Garfield 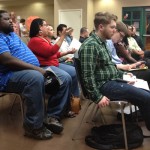 The Garfield Neighborhood’s Revitalization & Economic Development Committee meeting on Tuesday night began with a short update on the Downtown Comprehensive Transportation plan by Mark Melnychenko from the City of Phoenix Street Transportation Department, and then quickly moved on to the main event – presentations by Circle K representatives to develop what they call a “foundational store” at the southeast corner of 7th and Roosevelt Streets. For those of you new to this story, last year the neighborhood fought against this development, only to find Circle K “circling back” this year to try again.

David Cisiewski of MD Partners, a local firm providing “real world solutions to complex real estate development problems,” opened by sharing the changes that Circle K has incorporated into their new plans based on community feedback. He emphasized that they had spent the last year focusing on what they perceived to be the three main areas of the neighborhood’s concern: the site plan, crime, and traffic.

Cisiewski presented artist renderings of the proposed site remediation that included a reduction in the fueling station canopy from eight pumps to six; site access reduced to one entry/exit off 7th Street and one off of Roosevelt; landscaping and a new sidewalk along 7th Street; and a building designed to blend in with surrounding architecture.

Crime issues were addressed by both Carlos Estrada, in charge of loss prevention and security for Circle K in Arizona and Nevada, as well as Joe Clure, a City of Phoenix police officer who is also president of the Phoenix Law Enforcement Association (PLEA). During Clure’s presentation, it was pointed out, and he acknowledged, that PLEA receives substantial financial support from Circle K. He went on to say, “the philosophy of Circle K now is very different than what it used to be.” He did not, however, clarify the characteristics of this “new philosophy.” His acknowledgement of financial support for PLEA from Circle K, combined with his being put forward as a speaker for Circle K, seemed to undermine his credibility with some in the audience as he strove to convince them that there would be negligible crime impact expected from the new store.

Estrada went into detail about his efforts at Circle K to “fix a culture of crime” in Phoenix, mentioning the creation of the Circle K Crimebusters Facebook page and new doorframe cameras, as well as crime monitors that have been installed in 98 area stores. These crime monitors were described as tv monitors mounted behind store counters showing rotating images of miscreants: sort of a digitized “most wanted” board. Estrada went on to say that under his guidance “there has been a 40% reduction in calls for service over the last six months in Phoenix.”

Circle K spokespeople were bombarded by pointed questions from the community.

“Where have you been?” asked Stacey Champion, local community advocate. “We haven’t seen you out on our streets, helping at events, participating in the neighborhood, being a good neighbor.”

“There is just no level of trust,” said attendee JoMarie McDonald. “This is a fragile neighborhood and people have no faith in Circle K.”

This concern was backed up in a number of handouts at the meeting, including a “Circle K Historical Case Study” by Kevin Rille, President of the Evans Churchill Community Association and a letter from the Garfield Organization opposing Circle K’s request for a liquor license for the new site.

Rille’s case study showed the disparity between Circle K’s claims that the new, larger format stores will have less crime and less calls for service with the actual impact results from a new store at 59th Ave. and Camelback Road. Similar to the 7th St. and Roosevelt proposal, Circle K moved from an older, smaller store at 59th Ave and Camelback, to a newer, larger store across the street. During the last full three years of service at the old store (from 2005-2007) there were 127 calls for service. During the next full three years of the service at the new, larger format, ostensibly “safer” store, there were 1,482 total calls for service: an increase of 11.6 times the calls for service at the new store, despite all of the claims that the new format would reduce crime. (Download the case study handout here.)

Members of the community also pointed out the lack of visible effort from Circle K to address their concerns from last year about problems with already existing area stores.

Another resident said, “We already have three Circle K’s in the neighborhood. Who needs another Circle K?”

The push back from residents ranged from thoughtful to indignant, and the presentations from Circle K left many with more questions than answers.