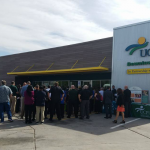 United Cerebral Palsy (UCP) of Central Arizona recently opened in downtown Phoenix, and brought with them their array of therapies and services for children and adults with disabilities. Their arrival wasn’t by chance, but the result of Garfield neighborhood stakeholders coming together to envision a workable future for downtown Phoenix. UCP’s move into a space formerly occupied by Circle K on the northeast corner of Roosevelt and 7th Streets was no accident either. For over 30 years Circle K has been collecting donations, in the ubiquitous spare change dish, from customers to the benefit of UCP. In the last five years alone, they’ve raised almost $26 million for the charity.

When Circle K was initially planning to build a new and larger store across the street, it was not their original intent to have UCP move into their old location. But as they made plans to move to the southeast corner of the intersection, they met opposition from a downtown community displeased with the idea of a larger gas station.

Because Roosevelt and 7th Street is the unofficial gateway to the Garfield neighborhood, stakeholders in the community got involved in what quickly turned into a disagreement over what types of businesses should be allowed in downtown. Garfield community members were unhappy with the larger designs Circle K was proposing, and many meetings were held to allow both parties to make their case. “Our neighborhood is known as, some would say ‘difficult’ … we have our standards. We have our history and we want to preserve that,” said Kim Moody, founder of the Alwun House, a historic staple in the Garfield district, and one of the vocal leaders of the opposition movement.

When Circle K first proposed taking over that corner, Moody said, the community was opposed to the congestion due to the higher number of pumps planned for the gas station, and residents were quite concerned. Initially, the community opposed the move entirely, but soon a negotiation got under way.

“We got into a better, calmer dialogue,” Moody said, and by the end of the discussion Circle K brought up the fact that it still held the lease to the old location, and asked neighborhood representatives if they had a non-profit in mind that would like to move in to the space. When nothing came of that initial search, Circle K suggested their longstanding partner UCP. While the path to today may have been a contentious one, bringing UCP into downtown Phoenix has opened up therapy and treatment options for children and adults who may otherwise have been unable to travel to their main location in north Phoenix.

UCP provides physical and developmental therapies for individuals with disabilities and their families. UCP Director of Programs Dora Vasquez describes it as a unique opportunity for the organization that resulted in immediate community impact.

“Circle K came to UCP and asked if we were interested in the building. We put a proposal in to use it for therapy services and as a place to house our home and community-based services staff,” explained Vasquez.

“Our goal is really to address the needs of people who live in the area who often have language or cultural barriers that prevent them from seeking the types of services we provide … we want to be that place where folks can come in and our therapist can address concerns about developmental milestones… offer therapies, things parents are concerned about,” she explained. In addition to therapy and educational services, UCP will be utilizing a large room within the building that will function as a community art venue.

Paul Rodriguez, Vice President of the Arizona Division of Circle K, said this was the first time they’ve had an existing facility that they didn’t either sell or give back to the leaseholder.

“It’s the first time we realized there was an opportunity to make good use of the building and property for future benefit. UCP was more than game for it,” Rodriguez said, noting that although Circle K has done nothing like this before, it certainly doesn’t have to be the last time it happens. The long relationship between Circle K and UCP was essential to this taking place, and Rodriguez cites Circle K customers and employees who’ve always made the choice to donate as key to enabling this turn of events.

From his vantage point, Kim Moody views UCP as a perfect fit for the neighborhood, and describes the façade as fitting for its arts district location. As Moody points out, in the Garfield district, the future is already underway, with expansions of locally-owned businesses taking place all over the neighborhood, ensuring the unique identity of the area remains intact for years to come.

Editor’s Note: We initially stated that Circle K raised nearly $15 million for UCP. The article has been updated to reflect the correct amount of nearly $26 million.